CSK will be looking to hit the straps from the first match of the tournament.

The much-awaited Indian Premier League (IPL) is finally here to set the stage on fire as two of the most followed teams will lock horns in the opening game of the tournament. One of the most intriguing rivalries in the history of the Indian T20 league will renew when the players of Chennai Super Kings and the defending Mumbai Indians will take the field on Saturday. However, it would be CSK who would want to hit the straps right away given that they are playing their first game after a two-year hiatus.

MS Dhoni is returning to where he belongs with the return of the franchise after he played under the leadership of Steve Smith for Rising Pune Supergiant last year. It is like a reunion of the players who have played for them in previous years this time around. The likes of Suresh Raina and Ravindra Jadeja will feel familiar once again to play with Mahi guiding them in this tournament. They also have a decent mix of youth and experience in the squad as they can go all the way in their come back season.

Having said that, they will be facing the most successful franchise in the history of IPL Mumbai Indians who will be playing in front of their crowd which is always raucous. It will be one heck of an encounter and the fans along with the players would be excited for the action to commence soon.

Here we bring to you the predicted XI of Chennai Super Kings for the opening encounter:

The opening combination is crucial for any team and CSK is no different to that fact. There is no denying that Murali Vijay will open for them as he has done for them even last time when he donned the yellow jersey. He has played some of the memorable innings for them and the team management will expect for him to come good during the course of the tournament as well. Even Vijay would be itching to celebrate his return to the franchise and play a winning knock in the opening game itself.

Faf du Plessis is yet to recover from his finger injury which means that Sam Billings will partner Vijay at the top. He is the attacking batsman which should bode well for CSK. Though he needs to set the tone along with his partner soon enough to avoid any confusion in the middle. Billings is the kind of player who can take the game away soon from the opposition once he gets going. The team management would be hoping the same when he will take the field in the tournament opener.

Suresh Raina will be back at his favourite position number 3 in the yellow jersey. He is the highest run-getter in the history of IPL and only player to score over 400 runs in almost every season. His explosive batting will most probably define CSK’s season this year. Raina is even leaner and fitter this time around as even he would know that it is important for his team to start well. He is master of the shortest format and it should not be a surprise if he plays a trailblazing knock to set the ball rolling for his team.

Shane Watson is coming off a great season in Pakistan Super League (PSL) with both bat and ball. He is also a good option to open the innings but in this line-up, the Australian veteran will be useful in the middle order to tonk the ball in the middle overs. Watson’s experience will be handy as he has seen it all in his illustrious career. He has been bowling well of late and it will literally be a huge bonus for CSK if he bowls 4 overs consistently in the tournament. For now, it will be crucial for him to start the season on a good note.

MS Dhoni will bat up the order this season as his hitting skills are on the wane. He is better off taking some time in the middle before launching an assault on the bowlers. All eyes will be on his captaincy as well given that he will be at the helm of any team after a significant gap of more than 15 months. Kedar Jadhav will have to play the role of the finisher in this team and he is well known for the same as well. Dhoni loves his slingy bowling action and he will be bowling few overs surely in this season.

Ravindra Jadeja didn’t bowl much in domestic cricket but will be expected to be back in the action under the leadership of Dhoni. The left-hander will be relishing the fact that he was retained and now he will have to repay the faith shown in him by the franchise. His batting is a lot more improved now and the team management might use Jadeja as a floater in the batting order. Moreover, Jadeja’s acrobatic fielding is an added plus on any given day.

Dwayne Bravo is one of the best death overs bowler going around in the world currently. He has done it before and will be tipped to do the job once again. Though Bravo’s batting has seen a downward trend but playing for CSK might bring the best out of him. He stayed away from PSL this season and will be raring to hit the straps in the first match of the IPL.

Dhoni prefers going with the experience and he will no doubt prefer Harbhajan Singh in the team over the leggie Karn Sharma at least at the start of the season. Bhajji knows the way Wankhede wicket will play and his knowledge about the venue will be crucial to the team as well given that he was the big part of the Mumbai franchise for last 10 years. The veteran offie will also be in the action after a long time and it will be important for him and his team that he warms himself up well ahead of the game.

Mark Wood, the pace bowler of England, is a decent pick from the franchise and will look forward to playing him throughout the season. His pace is good and is ‘hit the deck’ kind of bowler. Wood also has the ability of bowling slower deliveries and has variations up his sleeve to fox the batsmen as well. Shardul Thakur will take the new ball with him surely who has been part of the Indian team recently. International experience will come into good use for the youngster and even the coach Fleming has tipped him to be the death overs bowler.

Here’s CSK Predicted XI for the game against MI 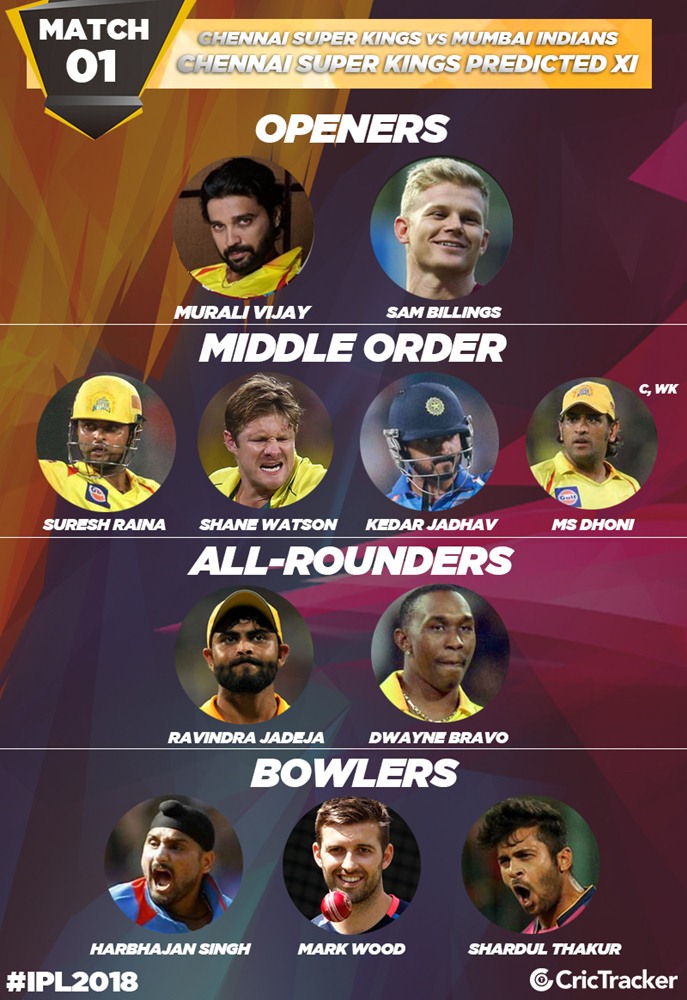