Jasprit Bumrah possesses an encouraging record against Suresh Raina and MS Dhoni in the IPL.

The rivalry of Mumbai Indians and Chennai Super Kings developed not only due to both the teams having big fan bases and titles behind them. The likes of Sachin Tendulkar and MS Dhoni on either sides and presence of India’s top T20 players Rohit Sharma and Suresh Raina made their meetings in the IPL even spicier. Jasprit Bumrah will have his first taste in IPL’s own El Clasico after turning out to be India’s top limited-overs bowler as both the teams clashing off for the first time since 2015.

Bumrah will be the head of Mumbai Indians’ bowling department alongside the overseas pacers and the young spin unit. Since making his International debut, the pacer bagged 35 wickets in 30 matches at an economy rate of 7.59. His skipper Rohit Sharma will be expecting to knock out CSK’s top players and make things easier to handle. Suresh Raina, who returned to the national side on the back of his efforts in the T20 format, will be a target of the home team.

The MI management can rely on Bumrah’s pace that could make things tough for Suresh Raina’s going at the crease. In fact, Bumrah dismissed Raina on two occasions in the IPL so far. The left-hander faced 22 balls against Bumrah in which 50% of them been dot deliveries. The MI pacer does possess an encouraging record in IPL against the CSK captain MS Dhoni as well. Bumrah dismissed his first Indian captain three times in 27 balls in the league. 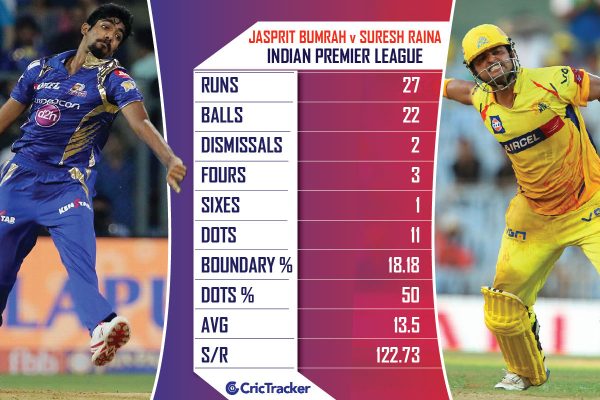 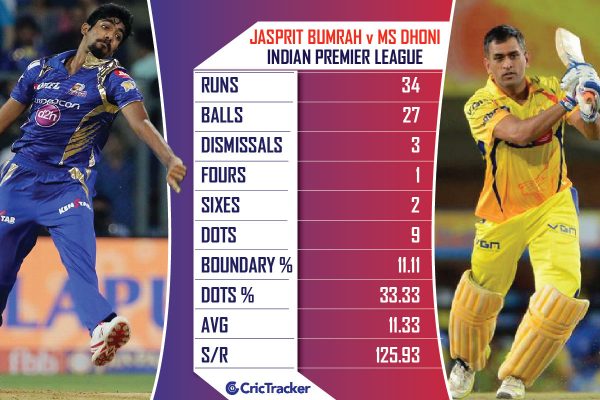 17 of the 34 runs MS Dhoni scored against Bumrah came in the last year’s Qualifier game. Dhoni scored 17 in 10 deliveries off Bumrah in that game including two huge hits in the final over. Except for that game, the pacer had a clear upper hand over the veteran keeper-batsman. Dhoni stands among the three players whom Bumrah dismissed three times in the Indian Premier League so far. Delhi Daredevils’ Glenn Maxwell and Rishabh Pant are the other players to be dismissed trice by Bumrah in the IPL.

Jasprit Bumrah’s bunnies in the IPL: 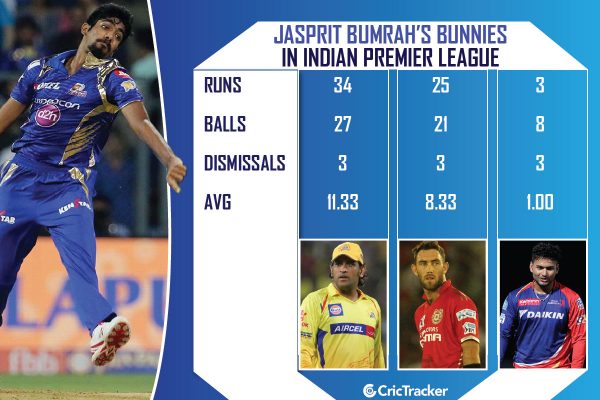