The Knights stormed to the top of the ladder with back-to-back victories.

The track at the Sawai Mansingh Stadium in Jaipur was never going to be similar to the Eden Gardens in Kolkata. During the toss, it was mentioned that the pitch wasn’t going to change a lot as the game progressed. Dinesh Karthik’s election to chase down the target indicated greater faith towards the batting unit rather than the bowling lineup which has stuttered when put under pressure.

The strategy from the Kolkata Knight Riders (KKR) was weird as the first four overs saw spinners operating, especially with the new ball. More shockingly, Sunil Narine was introduced inside the powerplay, a tactic the Knights hardly used ever since the off-break bowler remodelled his bowling action. The result- Ajinkya Rahane swept, drove, cut and again cut him for four consecutive boundaries.

Nitish Rana- The Man with the Golden Arm

Rajasthan Royals scored 62 runs off the last 43 balls at 8.65 runs, which eventually took them to 160 runs. However, the fact that the target for the Knights could have been much higher when Ajinkya Rahane and D’Arcy Short were batting can’t be denied. The difference was made by the same man who halted AB de Villiers and Virat Kohli’s surge- indeed Nitish Rana.

Albeit the wickets didn’t come in back-to-back deliveries, the impact was more or less the same. Rahane’s scalp was a combination of luck and some spontaneous work by the keeper. Dinesh Karthik collected the ball from the pitch and knocked the bails off before Rahane could make his ground. The second wicket saw Short’s stumps being knocked back by a medium pace-like 90 kmph.

How good were Rajasthan’s ‘uncapped’ spinners?

Krishnappa Gowtham and Shreyas Gopal scripted Rajasthan’s stupendous victory against the Royal Challengers Bangalore and yet again they churned out excellent channels, which kept the Knights guessing for a chunk of the game. Credit should also be given to Rahane for being aware of the minor, yet crucial aspects of the Knights batsmen.

Chris Lynn prefers pace on the ball and quite astutely, Gowtham was introduced into the attack. The decision paid dividends as a fast off-break by the tweaker skid through and cannoned into the stumps, pretty similar to Short’s dismissal by Rana. The next wicket took some time to come during which Robin Uthappa wielded the willow with expertise and most importantly, with domination.

This is where the not-so-experienced cricketer could have easily succumbed to the venom of the former Karnataka cricketer. However, he foxed the aggressive Uthappa into playing a false stroke. The wicket equally belonged to Ben Stokes, simply because of the composure, he showed at the boundary ropes, an attribute for which he is not known for, especially after the police investigations he has been involved in.

On the other hand, Gopal went wicket-less, but the spell was more than mere numbers. He bowled seven dot balls, equivalent to a maiden and a significant number as far as a T20 is concerned. The Knights were in a bit of scare in the final four overs, requiring 35 runs and the pressure was built by two of their most economical bowlers.  Nevertheless, the Knight Riders held their nerves to the victory. 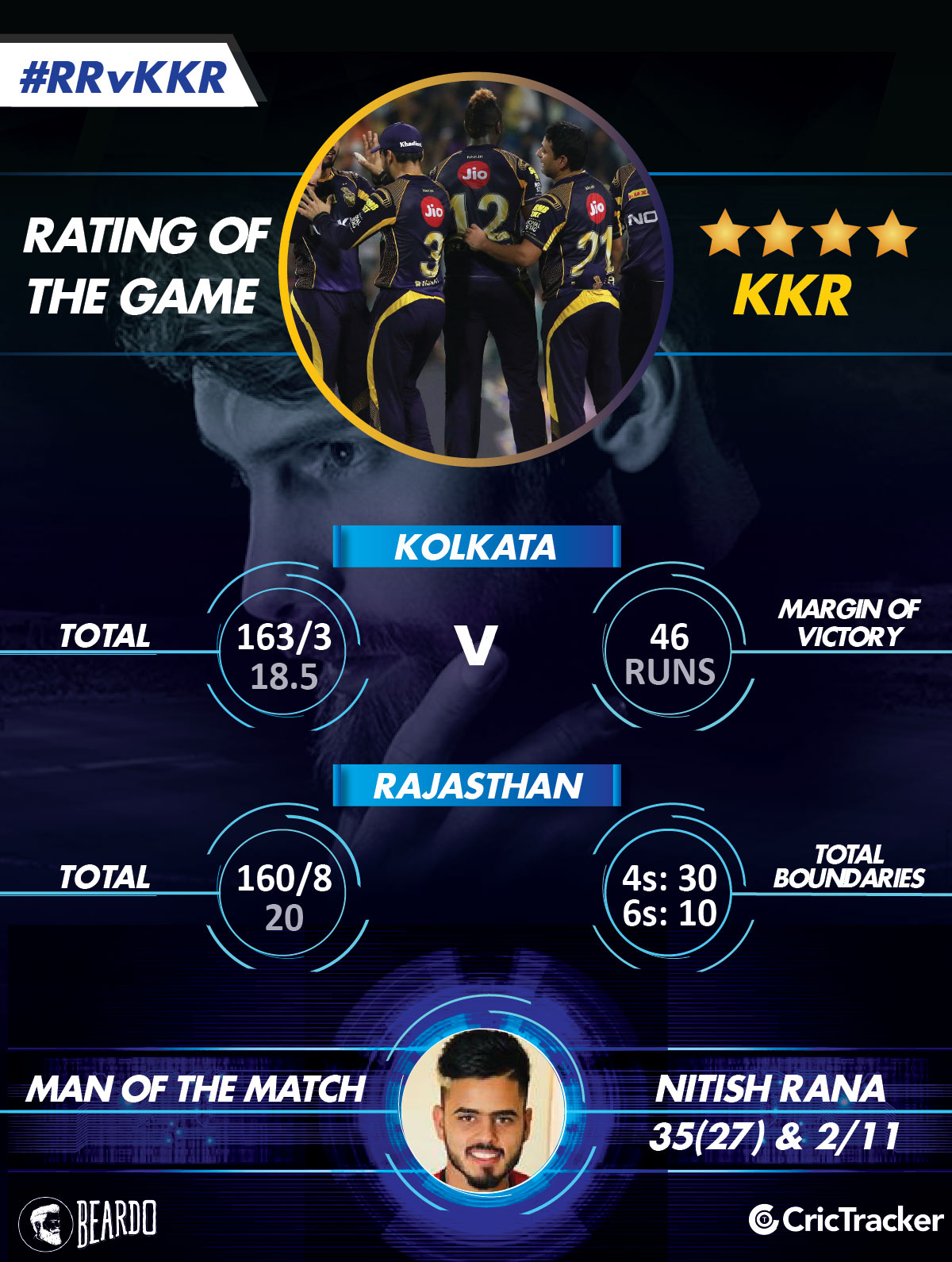