ABD YOU ARE THE BEST EVER!!!

One of the best cricketers in the World Cricket was on show today for Royal Challengers Bangalore (RCB) and he left each and everyone jaw-dropped in the awesomeness of his innings. AB de Villiers was the man for the hosts and Delhi Daredevils (DD) was the team to face the assault, unfortunately. He smacked the ball around the park ever since coming out to bat and just won the game single-handedly for his team. However, even Rishabh Pant played a brilliant knock for the visitors which was overshadowed in front of De Villiers.

Rishabh Pant is always criticised for trying to hit the ball very hard as he fails miserably. But he displayed his power and smartness in this game and propelled his team to a more than total which looked like a distant dream. Delhi registered the lowest powerplay score of the season as their openers Gautam Gambhir and Jason Roy failed to get going and also wasted a lot of balls.

The dynamic left-hander strode out to the middle with a lot of work to do and his team down and out at 23/2 in the sixth over. He began his innings by slamming the short ball from Yuzvendra Chahal through covers which was an early indication that he was in fine form. He also unfurled his reverse sweep in the 8th over off Washington Sundar which went past the backward point fielder as runs started to come fast for the visitors. It was vintage Pant on offer today for the spectators who had come to witness their team’s performance.

Interestingly, he concentrated on staying in the middle for long today and it helped his cause as he was set for a death overs when it came. He lit up the Chinnaswamy Stadium in the last 5 overs by smacking 6 sixes and each one of those were middle. Though the best of them came on the 5th delivery of the 16th over. The reverse sweep was timed perfectly over the third man fence as Chahal pushed the ball quicker only to watch it sail over.

AB de Villiers came out to bat at a situation when the fans of RCB had once again started to doubt their team after the run-out of Quinton de Kock. The pressure was on the home team but does ABD really knows what is pressure? This man was in the mood tonight and didn’t bother who was bowling to him. He walked across his first ball and swept the ball from Shahbaz Nadeem through the square leg region for four to announce himself.

What followed then was an absolute carnage! He moved across the crease wonderfully and played with the minds of the bowlers only to leave them helpless. He took a special liking to Nadeem and Rahul Tewatia who kept bowling short to him under pressure and the great man didn’t even a single opportunity to smack it into the stands. Well, its tough to point out the best shot when this cricketer puts on the exhibition of his shots.

But the shot which hit the roof of the Chinnaswamy has to that list. Tewatia bowled a rank hop delivery and De Villiers just rocked back and hoicked it over mid-wicket with all his might. The shot also registered the longest six of the tournament so far which went as long as 106 metres putting behind Andre Russell. The onslaught continued forever as RCB sealed the game easily. Actually which team doesn’t win when AB de Villiers gets going.

It was a knock of high-class and an absolute treat for the fans all over the world. ABD is such a legendary cricketer and the way he played, everyone was in awe of him as his teammates were giving him a standing ovation for literally every shot.

ABD YOU ARE THE BEST EVER!!!

Here’s CricTracker’s rating for the match: 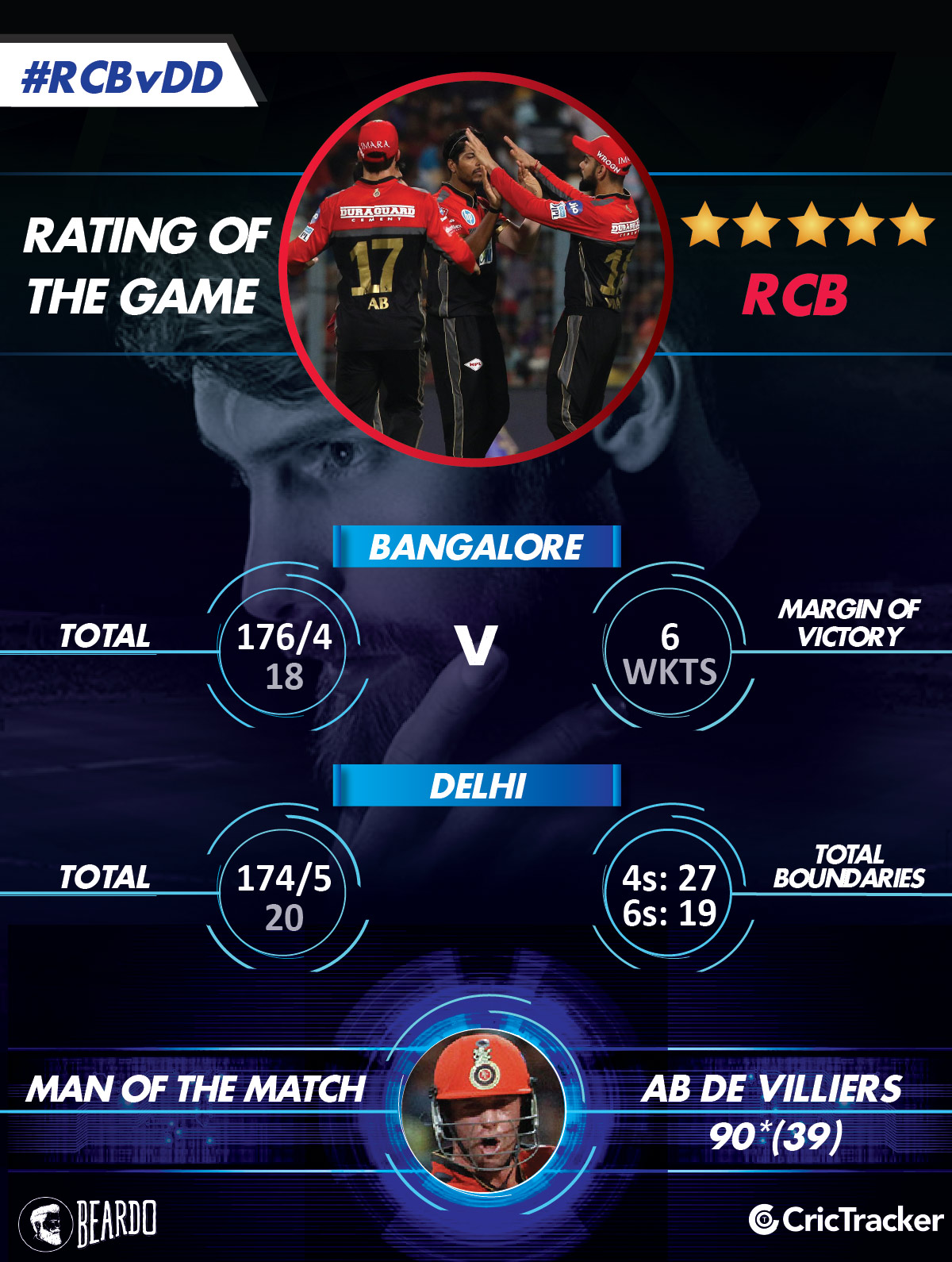