It's NOW or NEVER for Virat Kohli's men.

The Royal Challengers Bangalore’s (RCB) campaign has gone from bad to worse as the event has progressed. The franchise has managed to win three games and are staring at elimination. However, they still have a slender chance of entering the playoffs on the basis of net-run-rate. They have four games remaining out of which they have to win all of them.

There have been individual signs of brilliance, but the franchise has failed to perform as a unit. The team has chopped and changed, which doesn’t spring a surprise bearing in mind their indifferent outings. In our article, we take you through the probable lineup RCB is likely to field against the Sunrisers Hyderabad (SRH) at the Rajiv Gandhi International Stadium.

The openers slot are likely to remain unchanged. Quinton de Kock might not play even the next game and hence Parthiv Patel is likely to retain his position in the team. He has been stupendous with the willow against the Chennai Super Kings (CSK) at a time when the other batsmen departed one after the other. However, he needs to get his wicket-keeping form sorted.

Brendon McCullum has blown hot and cold in the tournament. The New Zealand batsman has got runs in a few games, but has had his fair share of failures as well. In the last game against CSK, he played a horrendous stroke, which led to his dismissal. The opener needs to give RCB a good start in order for them to dictate terms to the home team.

The middle order couldn’t perform in the last match on a slow wicket and perished to the likes of Ravindra Jadeja and Harbhajan Singh. Virat Kohli looked jittery and was castled by Jadeja. He didn’t play well against the Mumbai Indians (MI) as well. De Villiers was out stumped off Harbhajan. Mandeep Singh also strained in the slow and low track.

All three have to hit their straps and deliver the goods for the Challengers. The pitch in Hyderabad isn’t expected to be a batsman’s paradise and the trio will have to shoulder a chunk of the responsibility and guide RCB in the batting department.

Colin de Grandhomme hasn’t got many opportunities with the bat and has only played a few cameos lower down the order. However, his prowess with the leather has ruffled the feathers of many batsmen in the tournament. On wickets at the M.Chinnaswamy and the MCA Stadium, the Kiwi all-rounder has been hard to latch on to.

The track in Hyderabad would more or less be the same and hence, Grandhomme’s role will again be vital. Tim Southee has also been effective with the ball, which needs to come to the fore against SRH. Moreover, his usefulness as a lower-order batsman can’t be ruled out by any means.

The bowling lineup is a strong one, who performed well against MS Dhoni’s men. Umesh Yadav has been a gun bowler for them throughout the event. Most importantly, he has nipped out wickets in the hour of need. The Indian pacer has to be on top of his game against the SRH batting who has contributed to a significant extent for the Orange Army.

A lot will depend on the wrist-spinners in Murugan Ashwin and Yuzvendra Chahal, whose role will be crucial to keep a lid on the batsmen. Ashwin has been decent in the couple of games he has played so far. Chahal’s form is a concern as he has been erratic and hasn’t lived up to expectations.

Here’s RCB Predicted XI for the game against SRH 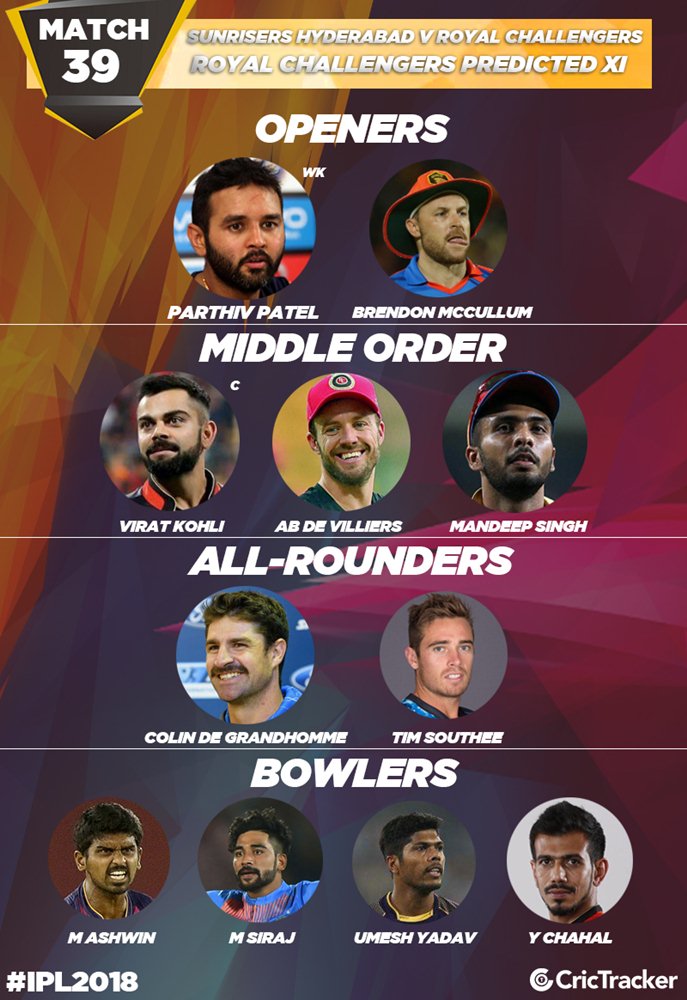