The Royals managed to cling on to their hopes of qualification in the humdinger.

The Rajasthan Royals have a 72 percent win record while chasing a target at the Sawai Mansingh Stadium in Jaipur. They have won 18 out of 22 matches when they have batted second. Moreover, the Chennai Super Kings’ bowling attack isn’t the strongest in this season’s Indian Premier League. Bearing these factors in mind, MS Dhoni’s decision to bat first was a tad bewildering.

Michael Clarke, during the pitch report, mentioned that the pitch seemed dry and has every chance of slowing down as the game progresses. Dhoni might have read the pitch exactly in the same manner. Moreover, RR defended a competitive score against the Kings XI Punjab. The previous match at the venue would have tempted the CSK skipper to bat first and take advantage of the best of the batting conditions.

The assessment didn’t backfire as Chennai managed 176 runs, which was expected to be a formidable score on the deck. Most importantly, they were able to neutralize the CSK batters as Krishnappa Gowtham, Ankit Sharma and Ish Sodhi churned out a combined spell of 8-0-68-1. Sodhi picked up the wicket of Suresh Raina, but it was attributed out of a false stroke by the left-hander, rather than an impeccable delivery.

Meanwhile, it was the pacers who managed to pick up wickets and stem the run-flow somewhat. Jofra Archer clocked 142.3 kmph in his very first ball, which turned out to be a bit too fast for Rayudu. His bat came down late and the ball cannoned into the stumps of an inside edge. Shane Watson didn’t race away by any means, but his sheer presence was enough to keep the opponents on their toes.

The partnership between Watson and Suresh Raina notched 86 runs off 56 balls which threatened to take the game away from the Royals. They were in dire requisite of a wicket and they introduced Archer for his second over and he didn’t disappoint. In the third ball of the 12th over, he dug in a short-pitched delivery which got big on Watson. The Aussie was late on the pull and ball the ballooned up and was safely pouched by Jos Buttler.

Another masterclass by Buttler

The strength of the Rajasthan batting lied in the top of the order with Sanju Samson and Jos Buttler being their gun batsmen. The franchise has depended on the duo at a time when experienced players like Ajinkya Rahane and Ben Stokes have been awfully out of touch. Stokes’ was surprisingly promoted to open and the move boomeranged. Rahane’s horror run continued as he perished after three balls. Buttler, yet another time, came to the party and got them home in the nail-biter.

Meanwhile, he notched his fourth half-century in a row and joined Virat Kohli, second on the list of most consecutive fifties in the IPL. He started fluently, however, lost a bit of rhythm in the middle overs, which allowed the required rate to escalate steadfastly. Nevertheless, he didn’t panic and nailed a six over mid-wicket in the final over of Dwayne Bravo, which sealed the fate of the match. He eventually scored 95 runs. 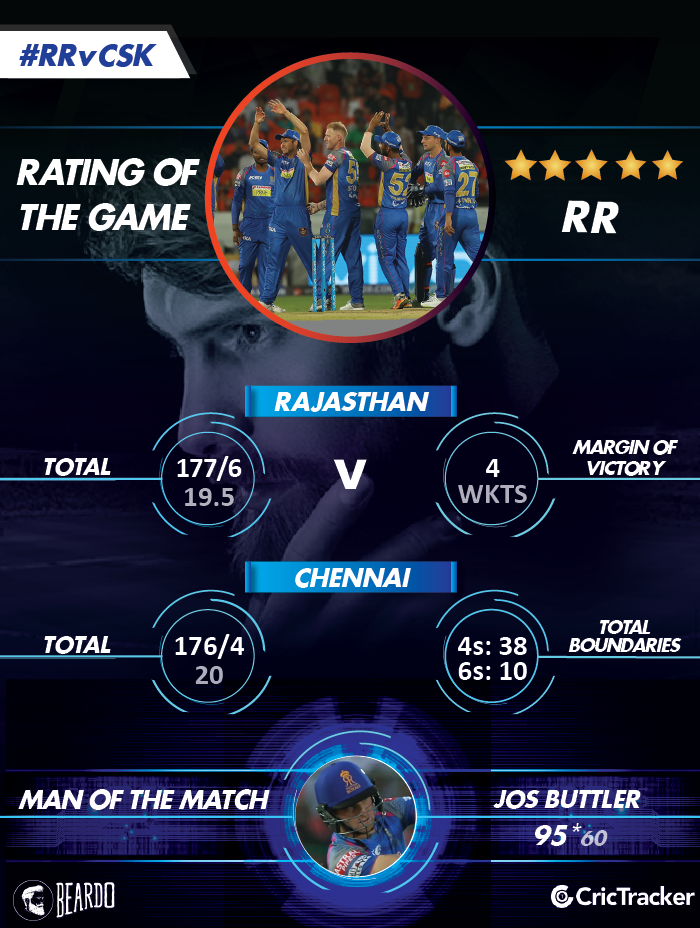