Jos Buttler continues to be Rajasthan Royals' most valuable player for the 5th time in a row in this season.

The defending champions Mumbai Indians (MI) now stand on the verge of elimination after losing a crucial encounter to the Rajasthan Royals who now improved their chances of finishing in the top four. The home team had a dream start with their openers putting on 87 at the start before they lost wickets in a flurry to finish with only 168/6 on the board. A former MI player Jos Buttler scored an unbeaten 94 in the chase which is his 5th consecutive fifty in the tournament. The visiting side chased down the target with seven wickets and two overs to spare.

Buttler’s record 5th consecutive fifty once again turned out to be crucial for the Rajasthan Royals (RR) which resulted in their 3rd successive win. He scored 94 off 53 balls with help of nine fours and five sixes to take his team over the line. He was the Most Valuable Player of the match earning a value of 1.035 crores as per the CricTracker’s Player Value Algorithm. MI skipper Rohit Sharma turned out to be the Liable Player of the game having bagged a golden duck. JP Duminy too didn’t gain any value from this match as he didn’t get a chance to bat once again. 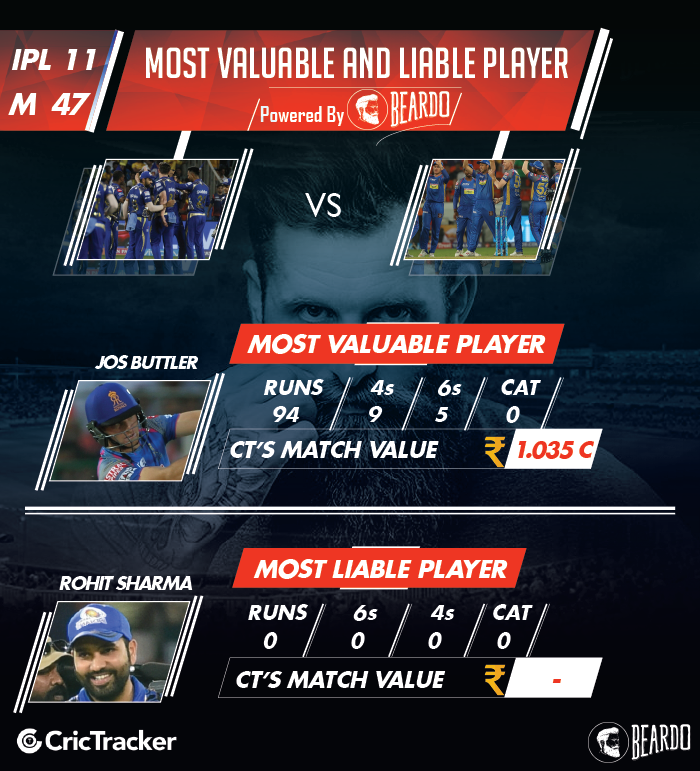 Jos Buttler‘s role was crucial in this game as the 2nd most valuable player was Sanju Samson. The keeper-batsman scored a quick-fire 26 and also took three catches on the field. Shreyas Gopal earned the lowest value among RR players as he faced the wrath of Evin Lewis conceding 21 runs in his two overs. D’Arcy Short continue to let the Rajasthan Royals down as he got out in the very first over scoring only four runs. Interestingly, this was the first time he got out to a pacer in this season. 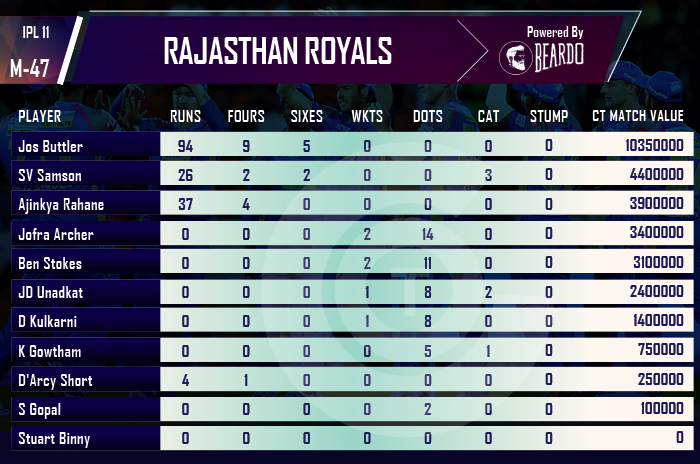 Evin Lewis was MI’s Most Valuable Player of the match for his 42-ball 60 that included four fours and four sixes, it earned him a value of 66 lakhs. Hardik Pandya obtained a value of 63 lakhs for his crucial 21-ball 36 at the end of MI’s innings and the two wickets that cost the team 52 runs. Surya Kumar Yadav continued to score runs consistently with a 31-ball 38 at the top which earned him a value of 46.5 lakhs. 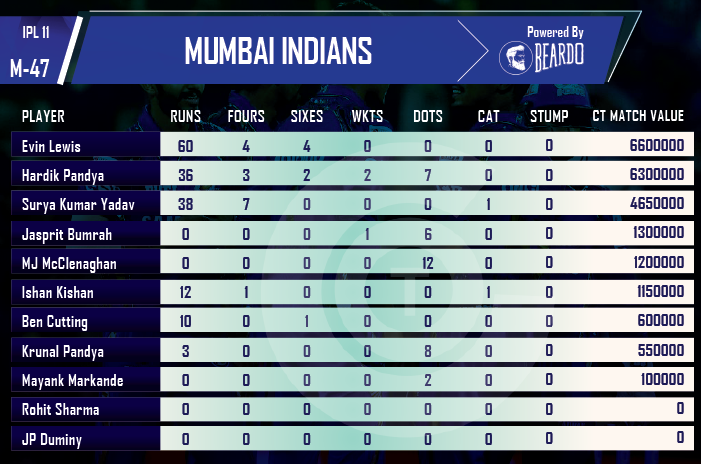