With this defeat, RCB were ousted from the tournament.

Jos Buttler’s departure meant that there was a massive void at the opening slot in the Rajasthan Royals (RR) batting. Skipper Ajinkya Rahane’s form hasn’t been up to the mark, but he was expected to take the responsibility and push himself up to open the batting. However, he resorted to sending Jofra Archer and the decision furrowed eyebrows bearing in mind his past records in the tournament- 15 runs at an average of three.

Rahane and his bizarre tactics

The gamble backfired as Jofra couldn’t handle the steep bounce from Umesh Yadav, he wasn’t expected to. Rahane invariably had to open as he was in the middle by the second over. Though the RR skipper could be lauded for sending Buttler at the top, the fact Rahul Tripathi was underutilised can’t be overlooked. Tripathi scored 80 runs and the tactic to play him lower down the order seemed even more irrational.

Ajinkya’s confidence wasn’t skyrocketing and that was palpable in the manner in which he batted. He looked good to start with and carved three boundaries in his first ten deliveries, which came in the fifth over. He played till the 14th over and could only manage 31 runs at a strike-rate of 106.45, despite a brisk start. The franchise would definitely have fallen short without Tripathi’s efforts.

Royal Challengers Bangalore (RCB) needed to trace down the target of 165 in 15.5 overs to overhaul Mumbai Indians’ (MI) Net Run Rate. Hence, a brisk start was paramount from that perspective. Virat Kohli was castled by Krishnappa Gowtham at that pushed the visitors on to the back-foot. However, Parthiv Patel and AB de Villiers hardly lost their cool and cantered along at a rate of nine in those many overs.

With a required rate of less than nine in the last 11 overs, the task didn’t seem daunting by any means. Shreyas Gopal had a separate set of ideas though. He was introduced into the attack in the seventh over and thereafter, the Sawai Mansingh Stadium was a witness to an exhibition of leg-breaks from Gopal. Parthiv Patel had no clue about the top-spinner from Gopal.

The decision went to the third umpire, but Parthiv was sure about his dismissal and was already inside the dugout when the verdict came. Moeen Ali tentatively fended at the ball, but could only manage to get a leading edge. The bowler completed the catch without much fuss. From a position of strength, RCB found themselves in utter shambles.

Mandeep Singh was next to fall prey to the tweaker as he ran down the track to smother the turn. Most importantly, he tried to break the shackles and unsettle Gopal’s wicket-churning spree. Mandeep missed the ball by a mile and Klaasen didn’t fumble whatsoever in collecting the leather and demolishing the stumps. Nevertheless, de Villiers was present, which kept the Challengers’ hopes ignited.

Gopal had three deliveries remaining at AB required to play out the deliveries and then construct the knock accordingly. Shreyas had unfinished business left and inflicted the body blow, from which the visiting team could never recover. De Villiers was fooled by another peach and he played all around the delivery and dragged his foot outside. Klaasen took the bails off and that invariably sealed the fate of the match. 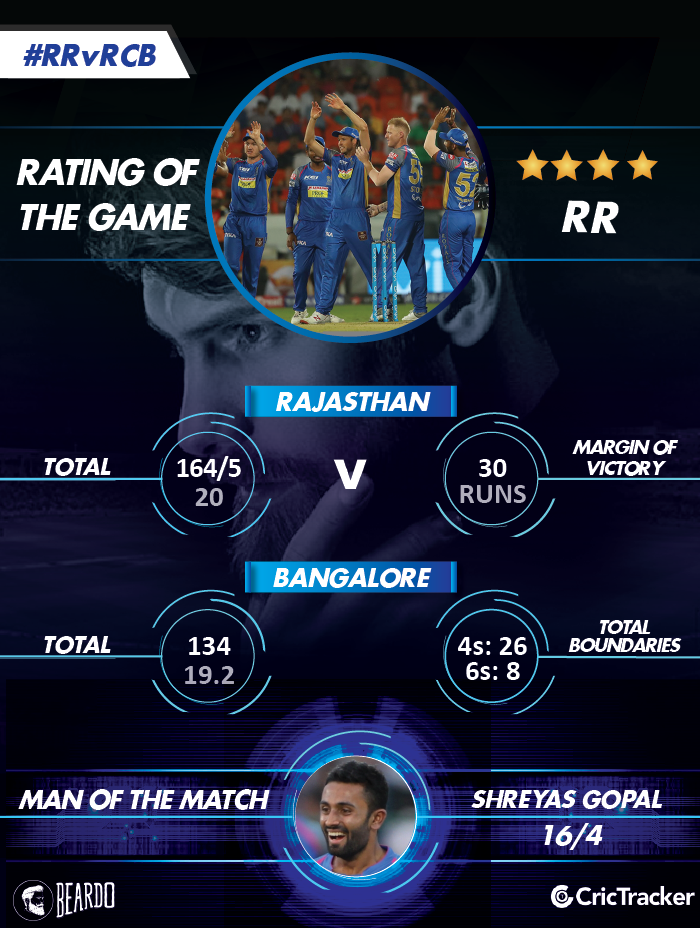