Ajinkya Rahane averages 63.2 against the Delhi Daredevils in the IPL.

The Rajasthan Royals, led by Ajinkya Rahane didn’t have best of starts to their new campaign as they went down against Sunrisers Hyderabad in their opening game by nine wickets. Their batting line up didn’t have any answers against a formidable bowling line-up of the home team. On a good batting surface, RR could only score 125/9 in the 20 overs and witnessed SRH chase it down with 25 balls to spare. RR will now face Delhi Daredevils, who also had a disappointing start to the season.

After a showdown against SRH, Royal’s batting line-up might find it easy to face the Delhi bowling which was ordinary against KXIP. The Indian bowlers Mohammed Shami and Amit Mishra were below par while Trent Boult wasn’t at his best in that game. The RR batsmen will be hoping to score some runs against this attack at their home ground Jaipur where they will play for the first time in more than four years. However, Mishra could possess a threat against the RR middle order which is vulnerable against leg-spinners.

England all-rounder Ben Stokes often found out by leg-spinners including Rashid Khan in the first game. Jos Buttler also failed to succeed over Rashid in crunch moments and Mishra’s bowling could make a difference in the match. The Rajasthan Royals‘ skipper Rahane is needed to play a crucial role in removing the leg-spinners threat. He along with D’Arcy Short and Sanju Samson are required to face more deliveries from Mishra and Sandeep Lamichhane if DD makes a surprise inclusion. 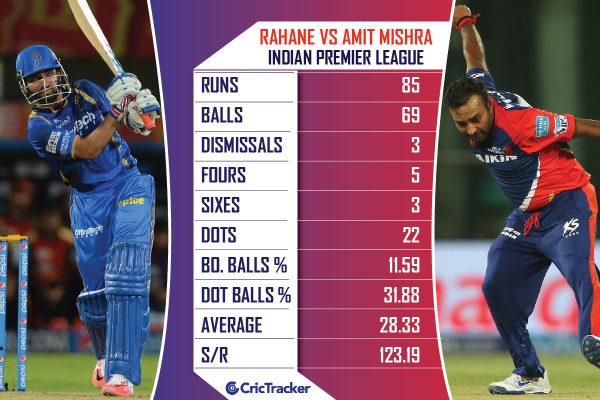 Ajinkya Rahane, however, doesn’t have an inspiring record against Mishra in the IPL as he got out to the leggie on three occasions scoring 85 runs in the 69 balls. The Indian Test team vice-captain will be looking to continue his impressive record against Delhi Daredevils and improve the same against Mishra in their first home game. Rahane scored 632 runs against the Delhi franchise at an average of 63.2 with six fifties in 15 innings.