Suresh Raina scored 636 runs in IPL knockout and playoff matches thus far at an average of 45.36.

The IPL 2018 has reached the playoff stage as the top two sides Sunrisers and Chennai Super Kings will be facing off in the first qualifier at the Wankhede Stadium. CSK, the franchise making a comeback to the league, bat deep but have been inconsistent with the ball. However, their bowling has done a decent job in the last game which will raise their confidence. Sunrisers Hyderabad, on the other hand, has hugely relied on their bowling for results but batting has largely improved thanks to the consistency of their skipper Kane Williamson.

Both the teams will look to make it to the final in this game itself and have a couple of days off before the grand finale at the same venue on Sunday. All the eyes will be on Suresh Raina who could be seen becoming the first player to touch the 5000-run milestone in the IPL. The left-handed batsman has thus far scored 4931 runs in the history of the league. Though Raina scored 391 runs in 13 matches this season, he never looked effective or elegant as he was in the previous years.

Even in the final league match against Kings XI Punjab, Raina scored an unbeaten 61 but that marked to be his slowest fifty in the Twenty20 format. It will be tough to rule out the damage Raina might cause in the playoffs for the oppositions given his past record in big matches. Raina scored 636 runs in IPL knockout and playoff matches thus far at an average of 45.36 and a strike-rate of 165.5 which are quite high when compared to his IPL career numbers of 34.48 and 138.39 respectively. 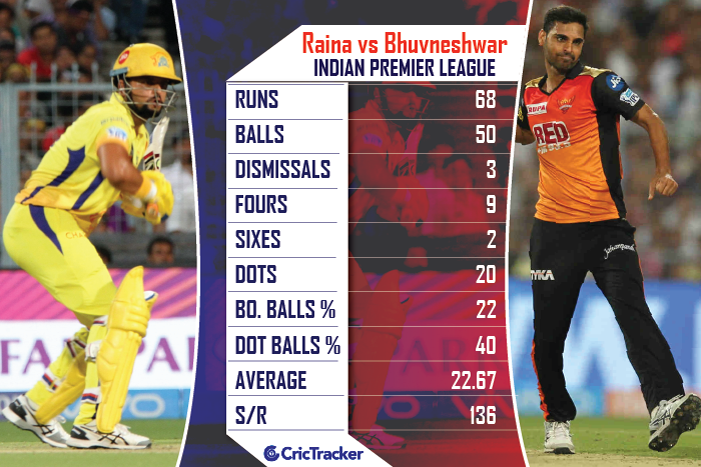 Taking on the strong Sunrisers’ bowling might not please Raina at this stage and especially facing the opposition’s main man Bhuvneshwar Kumar. The Uttar Pradesh lads have faced off on numerous occasions with the pacer gaining the upper hand more often. Raina scored 68 runs in 50 balls against Bhuvneshwar in this IPL thus far who dismissed the left-hander on three occasions. Raina could be caught in a spot of bother against his state-mate if he arrives at the crease in the powerplay on a seaming Wankhede track.