Here is an analysis of how well the players justified their price tags in the IPL 2018.

The Indian Premier League – IPL 2018 was not only a season that was full of close encounters and exciting finishes but also saw a tough competition between the players for the Orange and Purple Cap honours. The heads that wore the cap kept changing before Andrew Tye sealed Purple with 24 wickets in the league stage while Kane Williamson took the Orange cap in the playoffs. The franchises spent a lot of money to revamp their squads while a few hit the right note there were quite a few misses as well.

By topping the run-getters’ charts, Kane Williamson put up such a consistent display with the bat and scored his runs at a solid strike rate of 142.44. The SRH captain scored over 3000 T20 runs at a SR below 120 coming into the IPL season and by the end of it hit 1/3rd of his career’s T20 sixes in this tournament. It won’t be a surprise for many to find Rohit Sharma being crowned with the Liable Player of the tournament tag given his mediocre performances. The MI skipper failed to cross the 300-run mark for the first time in an IPL season as he finished with only 286 runs.

Rohit jumped around the MI batting order which affected his momentum and consistency as well as the team’s performance. He could only recover around 21% of the 15 crores he was paid by the franchise as retention value. Jaydev Unadkat also failed to come anywhere close to his auction value as he ended up with just 11 wickets which is less than half of his previous season’s tally. 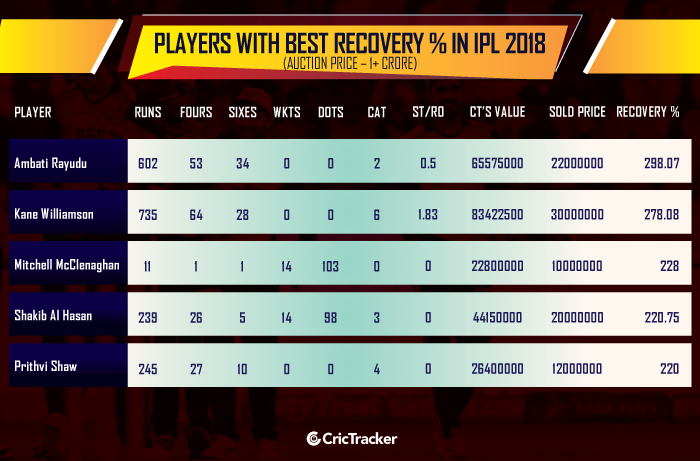 Among the 10 players who arrived in IPL 2018 with a price tag higher than 10 crores, KL Rahul had the best recovery rate. The Kings XI Punjab keeper-batsman covered 71% of the 11 crores the franchise paid him. Hardik Pandya stood on No.2 with his all-round performances which earned him a tournament value of 6.17 crores. Virat Kohli also earned a season value of 6 crores but given his price tag of 17 crores, he considered an underperformer. 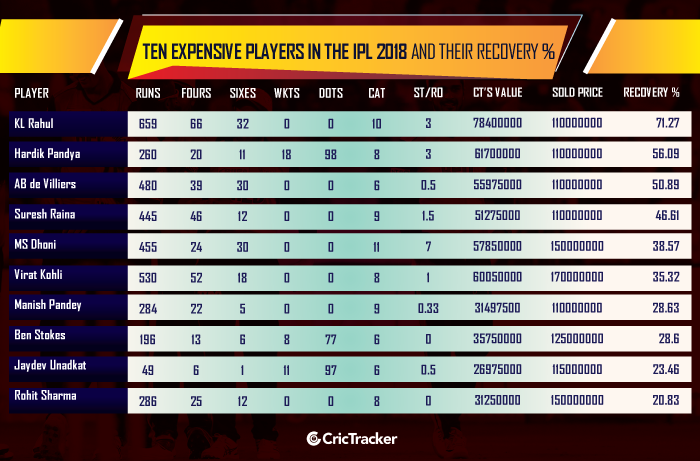