Who will you make captain in your fantasy?

The Indian Premier League (IPL) moves to an entirely new venue as far as this season is concerned. Vizag will be hosting the Eliminator which will be played between the Delhi Capitals (DC) and the Sunrisers Hyderabad (SRH) on Wednesday. While the Shreyas Iyer-led side is hard done to be playing the eliminator despite putting up such a good show in the league stage, SRH have made it to the playoffs with only six wins and they were extremely lucky to grab the fourth spot.

Both the teams will be itching to gain the momentum with a win in this game and would want to put their best foot forward. Chris Morris is likely to be back for the Capitals in place of Keemo Paul. The rest of the team looks settled. Having said that, they will surely miss Kagiso Rabada and Ishant Sharma will have to step up as the senior pro in the side. Yusuf Pathan endured a tough day against RCB and he might make way for Deepak Hooda as far as SRH is concerned.

The eliminator of the IPL between DC and SRH will be hosted by the Dr. Y.S. Rajasekhara Reddy ACA-VDCA Cricket Stadium in Visakhapatnam.

The weather is Vizag is hot but the 7:30 PM start to the game will only help the players. The temperature will hover in the early 30s during the match. The humidity will be at its peak though and it is likely to take a toll on both the teams. There is no rain in the forecast and dew might play a crucial role.

No one has a clear idea of how the pitch will behave. But it is expected to be flat as it is the first game of the season at the venue. Having said that, the surface tends to assist the spinners often and it might behave the same way in this game as well.

Don’t miss out on our Match Predictions bookmark the page now! 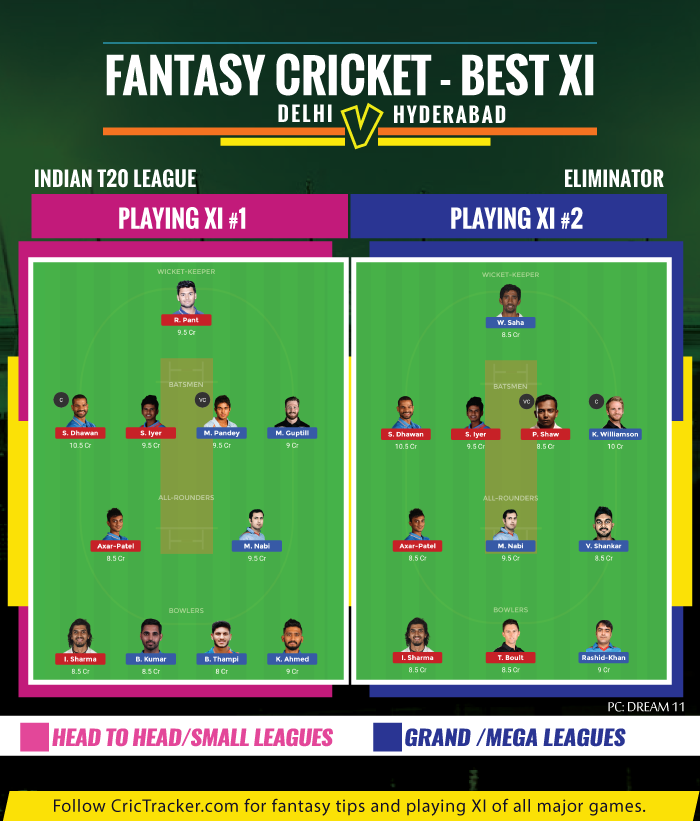 Vizag pitch tends to turn. It is beneficial to have more spinners in the team.

Prithvi Shaw could be made captain or vice-captain if you fancy taking a risk.

It is a knockout game and both the teams will give their best. Going by the current form, DC look favourites to beat SRH.