With a change in name, the team is optimistic about changing their fortunes too.

The revamped Delhi franchise is all set to create a new page in their IPL storyline. The story of their side has been quite dismal in the tournament history thus far. Barring the 2012 season when the likes of Kevin Pietersen and Virender Sehwag had helped the then Delhi Daredevils storm into the semis of the tournament, there has been very little success that the Delhi team has tasted in the IPL. In IPL 2019, the franchise will play as the Delhi Capitals.

Burying the demons of the past, the Capitals would hope to come up with an improved show in 2019. They have the resources needed to do so, and only need to get their act together on the field now. With a change in name, the team is optimistic about changing their fortunes too.

They are keen on doing well with their young setup with a number of young and exciting names – Shreyas Iyer, Sandeep Lamicchane, Sherfane Rutherford, Rishabh Pant, and the list goes on. The iconic Feroz Shah Kotla will play as the home venue for the franchise in seven league matches this season and there would be no adopted home venues for the team this year.

The Delhi Capitals will kick start their season against the Mumbai Indians in an away game on Sunday, March 24. They will then head north to their den in Delhi, to host Chennai Super Kings and the Kolkata Knight Riders in their next two matches. They would stay north to play Kings XI Punjab next, in Mohali, before heading back to Delhi to host the Sunrisers Hyderabad. The first half of the league stages would end with two away matches for team Delhi.

In the second half of the league stages, they will get to play four home matches and three away matches. The final league game for the team would be against the Rajasthan Royals in Delhi on May 3rd. The fans would hope that they get to see the Delhi Capitals in action for more than 14 matches this season!

Here is the complete league stage schedule of the Delhi Capitals: 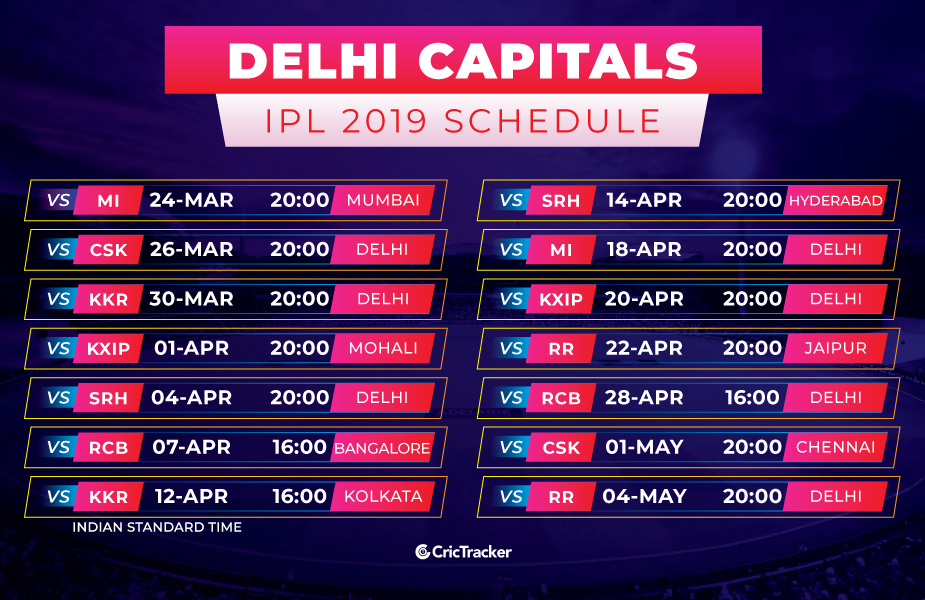