Here we look at the players Kolkata Knight Riders could go for at the auction.

The Kolkata Knight Riders had a mixture of Indian Internationals, overseas stars and the uncapped players contributing collectively in the previous edition of the IPL. The franchise led by Dinesh Karthik made it to the playoffs in the last season but crashed out in a closely contested Qualifier match against the table toppers Sunrisers Hyderabad. The franchise has always preferred to have a set of upcoming players in the ranks with the view of making most out of them in the future.

KKR now have 12 slots to fill in the coming auction but only with a salary cap of 15.20 crores in which they have to look for five overseas players as well. They might not get a chance of engaging in a bidding war as their purse has got a dent due to the high-price tagged and retained players in the squad. The Knight Riders would thus been looking for long term prospect players.

Here we look at the players Kolkata Knight Riders could go for at the auction:

The Indian base was crucial for Kolkata Knight Riders in the last season who would be hoping to get some solid back-ups, unlike the last season. Due to the limited budget, KKR might not even chase the hot property Shivam Dube who is on the radar of many teams. Thus they could bring back the local lads such as Manoj Tiwary and Mohammed Shami.

Despite already having three spinners in their line-up, the Knight Riders could aim for the Tamil Nadu spinner Varun Chakaravarthy. The leg-spinner lit up the TNPL with his mystery bowling and also excelled in the Vijay Hazare Trophy. Chakaravarthy was invited to bowl at the KKR nets by their captain Dinesh Karthik, another player from Tamil Nadu. The skipper’s inputs could well decide whether KKR bid for this 27-year-old. 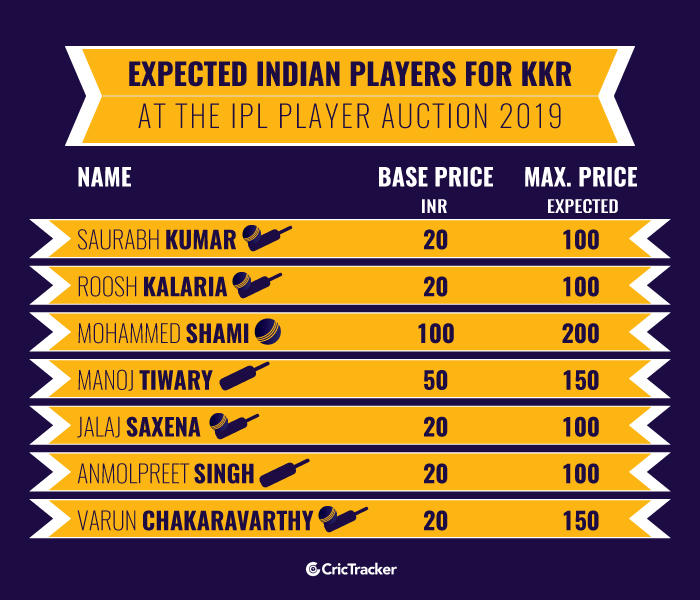