Who will break the jinx?

So the Royal Derby is here. The Rajasthan Royals (RR) will be hosting the Royal Challengers Bangalore (RCB) in Jaipur. Unfortunately, there is nothing royal for both the teams when one looks at the points table. They are still winless this season after playing three matches and the jinx will definitely break for one of the teams on Tuesday. It goes without saying that both the sides will go hard at each other as the home advantage will stay with the Royals.

The RCB were literally blown away by the Sunrisers Hyderabad on Sunday. David Warner and Jonny Bairstow annihilated their bowlers and there needs some serious improvement in that department for the team. The batting promises a lot for the Bangalore franchise every year but when it comes to performing on the field, nobody turns up. Even Virat Kohli is yet to come to the terms for them and apart from one AB de Villiers’ knock, everything is dry in that department as well.

The Royals’ case is not that worse. They have been doing well in terms of planning and execute those in the middle as well only to botch it up in the end. Against the CSK, they bowled well for the major part of the innings but MS Dhoni took the game away from them in a single over. Even in the chase, they fought back to bring the equation down to 12 from last over and again could finish it off. They will have to concentrate on clinching the crunch moments.

The pitch at the Sawai Mansingh Stadium in Jaipur is known to dish out some decent scores. In the first game of the season, the score of 185 was almost chased and a similar kind of track is expected. The scorching heat will greet Jaipur the whole day on Tuesday. But the temperature will cool down a bit in the evening. There is no question of raining.

The Royals should take a tough call on their overseas contingent and the first one to come under the scanner would be Steve Smith. He is batting out of his normal batting position and seems to be not coming to the terms of this role. Ashton Turner is fresh off his Mohali heroics against India and he could walk into the team as Australian players are now available with Pakistan series done and dusted.

In the bowling department, Jaydev Unadkat might get a break and Varun Aaron might replace him. He possesses some pace and he can trouble the opposition batsmen.

In terms of selection, RCB are clearly in shambles at the moment. Nothing is working for them. But Marcus Stoinis and Nathan Coulter-Nile joining the team could just work out the best for the team. The duo should walk into the playing XI in place of Shimron Hetmyer and Colin de Grandhomme. Also, the youngster Prayas Roy Barman endured a forgettable debut and Washington Sundar can come in place of him.

The prediction is for the RCB to finally win their first match of the season. 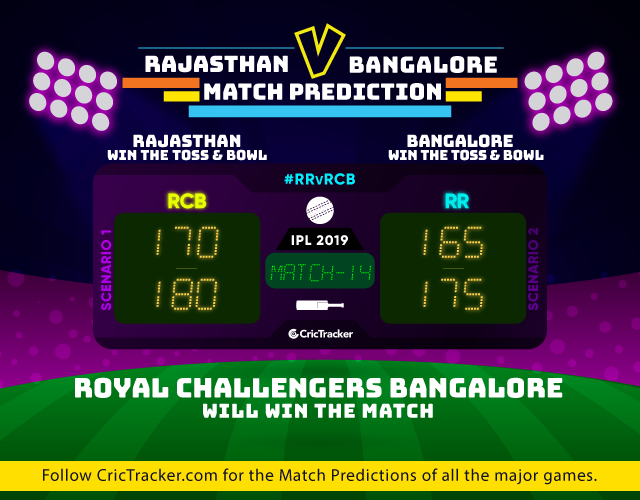