Will the Orange Army be able to conquer the Eden fortress of the Knight Riders?

The second game of the Indian Premier League (IPL) will see the two-time champions Kolkata Knight Riders (KKR) and the Sunrisers Hyderabad (SRH) getting their campaign underway. The first doubleheader of the season will greet the fans and it will be an afternoon game at the Eden Gardens. Dinesh Karthik will continue to lead the KKR while there is still a doubt over Kane Williamson’s participation in this game.

He is the skipper of the season for them but there is no update on the shoulder injury which he sustained during the recent Test series against Bangladesh. If he misses the game, Bhuvneshwar Kumar will lead the Sunrisers and will have the experience of David Warner by his side as well.

The Knight Riders, on the other hand, were jolted with a blow before the season itself. They lost three of their fast bowlers due to injury and it remains to be seen if their replacements, Sandeep Warrier and KC Cariappa, will get an opportunity. Nevertheless, a close game is on the cards with both the teams looking balanced and a full house is expected at the Eden.

The 22 yards at the Eden is known to be a flat one, especially early in the season. Moreover, the ground is small and the ball travels at the venue. As far as the conditions are concerned, the sun will be out when the match will start and the temperature will hover around 35 Degrees Celsius. However, it will get cooler as the day progresses and it will drop to the late 20s. No rain is in the forecast.

The hit duo of Sunil Narine and Chris Lynn is back for the KKR at the top of the order. The veteran in this format Robin Uthappa will bat at three while Shubman Gill is expected to be a regular feature in this side this season. Nitish Rana comes next with the skipper Karthik to follow. He and Andre Russell are the designated finishers in this team.

KKR have a total of three specialist spinners in Narine, Kuldeep Yadav and Piyush Chawla. Prasidh Krishna and Lockie Ferguson will be the pace bowlers. There is a doubt over Russell’s bowling ability thanks to his knee injury. If needed, Rana can roll his arm over as well.

The blockbuster and dream duo of Warner and Williamson will open for the Orange army. Last year’s biggest disappointment, Manish Pandey might get a different role this time at three while India recruit Vijay Shankar looks the best candidate on the ‘number 4’ slot. Saha is the best wicketkeeper with Shakib Al Hasan and Yusuf Pathan to follow.

Rashid Khan’s primary role is to bowl four overs but he can tonk the ball if needed as well. Bhuvi, Siddarth Kaul and Khaleel Ahmed make up for a potent bowling attack. Bairstow might have to wait for his chance as of now.

The prediction is for the KKR to start their campaign on a high. 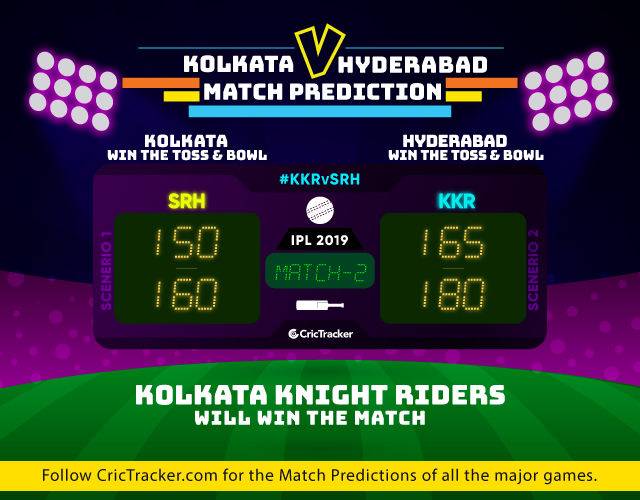