In a crucial clash, Livingstone would turn up for the Rajasthan Royals while Delhi might go unchanged.

Will it be any better confidence booster than another victory for Rajasthan Royals in their territory? The Royals will play Delhi Capitals on Monday. Buoyed by a win against Mumbai Indians, the Steve Smith-led pink outfits will look to down the youngest side, Delhi. So far it has not been a very good record at the Sawai Mansingh Stadium for the home side. They have played five won only two and lost three so far.

There will definitely be an impact on RCB if Rajasthan keep their winning run intact. Because the Royal Challengers might only survive a chance if they win all the matches and if RR loses at least a couple of theirs. On the contrary, Delhi have been good in all three dimensions as they won six of the 10 matches played so far. But, they have to up the ante in the away games as they have more losses there.

Both the teams have been very balanced in the games they won. The contribution has been by almost everyone in the teams. Capitals tied on the third spot with Mumbai Indians following Chennai Super Kings.

New skipper Steve Smith might bring in Rahul Tripathi as a replacement for his predecessor Ajinkya Rahane. Rahane stints with the bat have not been very impressive in the past couple of matches while Tripathi’s scored a half-ton. At SMS, Rajasthan would want to bring an all-rounder Liam Livingstone instead Ashton Turner. They need depth in the batting as the average scores here have been 140-150. It is important for them to bring an all-rounder who can be in action with both bat and ball which isn’t quite the case with Turner.

The Delhi side would go unchanged as the team seems to be in good form after beating Kings XI Punjab. Captain Shreyas Iyer has been consistent and is shouldering the responsibility of taking the team home. In the previous match, DC bowlers’ contribution was also at par with what was expected of them. There is no one man dependency of Capitals, so skipper Iyer wouldn’t like to disturb the team’s consistency by making changes.

The Capitals win the toss, opt to field first 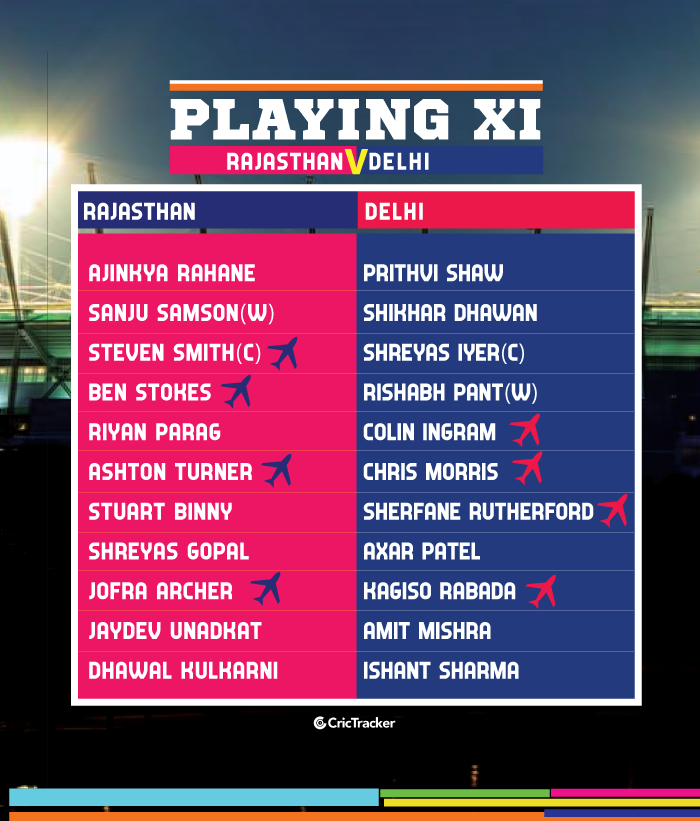 There has been a lot of talk about Smith becoming RR skipper and replacing Rahane. Now, for the Australian, it’s important to shoulder responsibilities and guide his team to winning ways. There is a necessity of being consistent in generating the positive results as well. Add to that his previous performance against Mumbai Indians. His handy knock of unbeaten 59 against the IPL juggernauts is notable. So playing again at home, the team will focus on Steve Smith.

Of late, Shreyas has been good in the away games. Now playing another away game, it’s time for the right-hander again to build muscle for his willow. In two away matches, he scored 67 and 45 at M Chinnaswamy and Rajiv Gandhi Stadium respectively. He has been in prime form of late irrespective of even the opposition. In the previous match, his knock of unbeaten 58 was crucial for the team which took them over the line.

20 – Number of wickets Kagiso Rabada to be at the top of the table.