The Royals last beat KKR at the Eden Gardens way back in 2008.

Kolkata Knight Riders (KKR) are straining to arrest their slump in this edition’s Indian Premier League (IPL). Following their defeat at the hands of the Sunrisers Hyderabad (SRH), KKR now stands in a must-win position for the rest of the four matches. Dinesh Karthik & Co. are now scheduled to cross swords with the Rajasthan Royals (RR) at the Eden Gardens, a venue where they lost their last three games.

However, the Men in Gold and Purple can take heart from the fact that their most comprehensive victory came against the Royals in Jaipur. RR on the other hand, are almost out of the competition and need some miracle in order to make the cut for the next round. Steve Smith’s team lost their previous match against the Delhi Capitals (DC) by six wickets despite Ajinkya Rahane’s century.

As far as the pitch in Kolkata is concerned, there wouldn’t be a lot of respite for the bowlers by any means. Also with short boundaries, the bowlers can’t err in their line and lengths, otherwise they’ll be carted around the park. Another high-scoring encounter can be expected in the City of Joy.

According to AccuWeather, the temperature will be around the 27-degrees and 30-degrees Celsius. However, the humidity will be on the higher side with the numbers extending to 90 per cent. There will be a significant amount of dew throughout the match.

KKR may bring in uncapped Aussie paceman Matt Kelly in place of Harry Gurney. Also, Kuldeep Yadav may be brought back, replacing KC Cariappa. Lynn and Narine will continue to open the batting with Shubman Gill at number three. The onus would also be on Rana and Karthik. It would again be interesting to see how KKR use Andre Russell’s services in the lineup. Yarra Prithviraj is likely to retain his place.

The Royals may not make any changes even after the loss. Rahane and Smith are in decent form. Sanju Samson will want to make amends for his duck in the previous game. Ben Stokes will want to step up one last time before he leaves. Ashton Turner’s first task will be to get off the mark after three failures. Parag and Binny are no mugs with the bat either. All the pacers have a lot to work on ahead of this game as they have been the weaker link for the side.

The Queenslander is generally someone, who doesn’t curb his natural instincts. But in this IPL, he hasn’t quite been able to play his strokes freely. Runs haven’t eluded him, but his strike rate hasn’t been all that great, barring the odd knock against the Super Kings. He had a decent outing when KKR last met RR in Jaipur and will be keen to replicate the same in Kolkata as well.

The experienced Smith has churned out a couple of decent knocks after he was handed over the captaincy mantle from Rahane. Batting higher up the order, he has taken the responsibility of guiding the team forward. At the Eden Gardens, he’ll get another chance of piling on a big score. He can also cash in on the fact that the Knight Riders’ bowling isn’t in the best of form for quite some time. 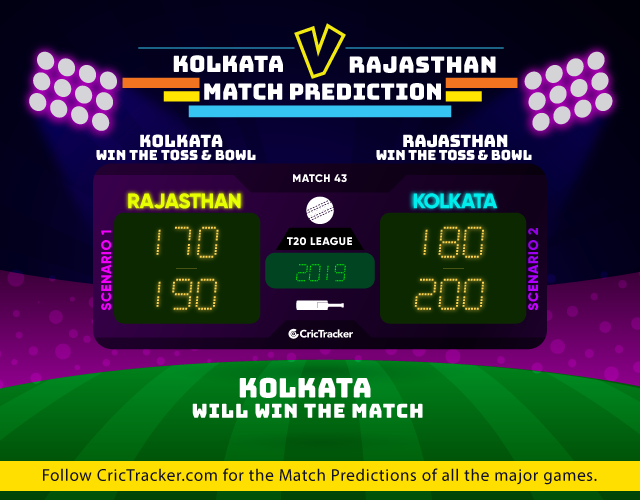