IPL 2019: Match 45, RR vs SRH, Preview: Can Rajasthan Royals give a fitting reply to Sunrisers Hyderabad?

In a crucial contest both RR and SRH to make a few changes in their sides some forced and others rather necessary.

Rajasthan Royals have been instrumental after Steve Smith took charge of the team, their recent win against Kolkata Knight Riders keep them hanging to the rope ends in the Playoffs race. Of the 11 matches played, Royals won four matches. Out of 7 matches, Royals lost 4 matches at the Sawai Mansingh Stadium and 3 away matches. It’s now or never situation for Smith’s men, they need another win to keep the playoffs hopes intact. In a crucial clash, Royals will take on Sunrisers Hyderabad at Sawai Mansingh on Saturday.

Well, it’s also an important encounter for the Hyderabad side. They need at least three wins of the 4 matches to make the playoffs. Sunrisers won 5 of the 10 matches and currently stand at no. 4 spot in the points table. But, it is a contrary situation for the orange outfits as they lost their last match against CSK at Chepauk.

Now, SRH’s other main player Jonny Bairstow won’t be playing, as the wicketkeeper-batsman left for national duty. It is thus important to put in a team effort instead of depending a few individuals. In the previous match this season, Hyderabad defeated Royal by 5 wickets in Hyderabad.

With the Royals being in good touch, they wouldn’t want any changes but at least two. With Stokes returning home to join the national team Smith can rope in Ashton Turner for the spot. But, the Australian made headlines for all wrong reasons. Out of nowhere, the right-hander came up to three consecutive ducks and now that they have the home advantage, he should stand up to the billings. Well, this is not it, the Indian-New Zealander, Ish Sodhi might make a comeback for Jofra Archer.

After losing to CSK, the Hyderabad side might have to rejig their combination and should make some changes to not lag in the playoffs race. With Jonny out, Kane Williamson might take his place at the top while Wriddhiman Saha might compensate for the English player as the former is a wicketkeeper-batsman.

Saha might replace Deepak Hooda, who couldn’t shine much unlike in other seasons. The pace trio of Bhuvneshwar, Khaleel and Sandeep need to buck up with their form, while there might be another change as Mohammad Nabi could come in for Skaib Al Hasan. The bigger role has to be played by the top order and power play bowlers who have been expensive so far in the tournament.

Toss: Rajasthan Royals won the toss and opted to field. 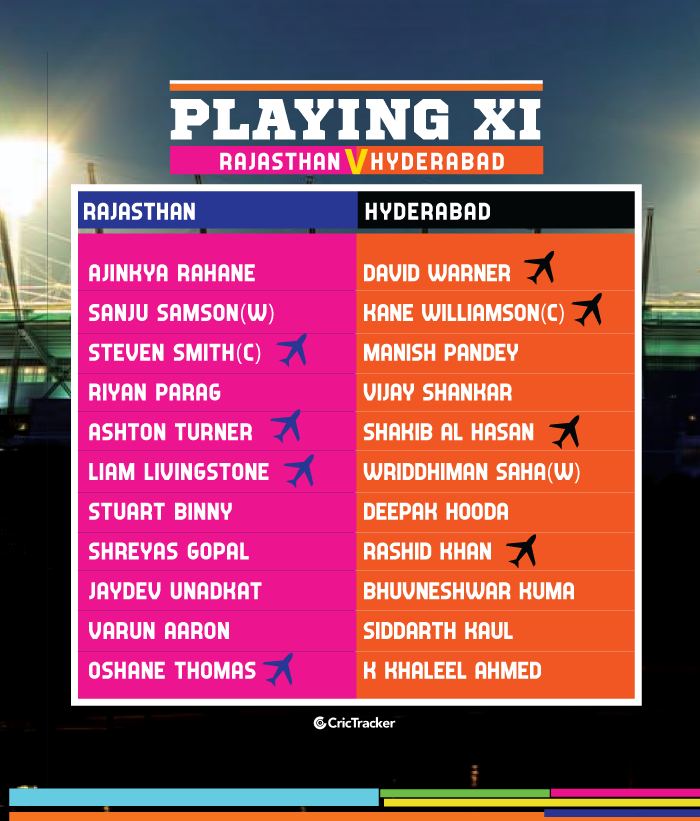 “Well begun is half done,’ they said. Whatever they said, well said. One can’t discount the impact of a good hammering in the powerplay. That depends mostly on the top order. If they can fold the bowlers to give them nightmarish economy rates, more often than not, it sets the tone for the rest of the innings.

After being relieved of the captaincy pressure, Ajinkya Rahane seems to be in good touch. The Royals opener scored 34 comprising 5 boundaries and a maximum against KKR after amassing an unbeaten 105 against DC. He would want to make the heads turn after having faced a lot of flak for not being able to win games as the skipper.

When it comes to a holding the command of the team from the front, who else can do better than Davis Warner? The southpaw has been outstanding so far in the tournament. In every match irrespective of win or loss, there is a stamp of Warner as he has had scored at least 30-50% of team score in every match.

If this doesn’t merit his performance this season, what else can? But, now with his partner in crime <of breaking opponents’ backs> Jonny Bairstow not in the scene, the team would expect more responsible innings from him. The orange cap holder also needs to strike balance with the new partner and continue to flourish at the start to keep the scores skyrocketing.

4 – Of six seasons played with SRH, David Warner has been the orange cap holder 4 times, more than any player.