RCB have won their last three matches. Can they continue their winning streak?

The Delhi Capitals (DC) will be taking the field on Sunday afternoon after a significant five-day break. They will be hosting the in-form Royal Challengers Bangalore (RCB) at the Feroz Shah Kotla Stadium and it will be the first afternoon game at the venue. RCB have found the groove at the right time and are still somehow alive in the tournament while the Capitals are only one win away from qualifying for the playoffs.

The hosts last played the Rajasthan Royals (RR) in Jaipur and successfully chased down 192 thanks to Rishabh Pant‘s superb knock. Their spinners went for runs in that game but the pacers pulled things back nicely at the death to restrict the opposition. RCB have a lot of hitters in the line-up and they will have to keep striking every now and then. Kagiso Rabada and Ishant Sharma will be key for the Capitals in this encounter.

One of the relieving things for RCB is different players are putting their hand up every game. They have been less dependent on Virat Kohli and AB de Villiers in the last few matches. Moeen Ali and Marcus Stoinis have done justice to their signings. But with the former not available anymore, he will be missed a lot in all the departments. Stoinis will have to make up for Ali’s absence with more responsibility now.

Not many are aware of how the pitch will behave at the Kotla in the 4 PM game. So far, in this season the wicket has been turning a fair bit and the dew is also playing a role in the second innings. Dew might also play a part in this game after 6 PM and it might become tough for the team bowling second. Chasing has been the trend at the venue through this season and it is likely to continue for this game as well.

It will be extremely hot in Delhi when the two teams take the field. The temperature is expected to hover in the 40s during the game and it will dip just a bit once the sun sets. Dew is also likely to come in as the match progresses while there is no rain in the forecast.

DC are expected to go in with the same line-up from their previous game. Rishabh Pant is back in form while Sherfane Rutherford hasn’t done badly in the very limited opportunities so far. There would be a temptation to bring in Sandeep Lamichhane but that will depend on the pitch. Chris Morris’ bowling is a matter of concern for them and the South African should step up with the tournament reaching its business end.

RCB have been dealt with an injury blow to Dale Steyn who has been ruled out of the tournament. Moeen Ali has also left for England to join England team for the Pakistan series and Heinrich Klaasen looks the possible candidate to replace him. Klaasen should be among the runs soon while the other bowlers should step up now with Moeen not available to bowl his wily off-spin.

The DC skipper has blown hot and cold this season. There is no doubt about the talent he possesses and has played a couple of match-winning knocks for his team as well. But the time has come for him to be consistent with the playoffs race intensifying. His captaincy will also be tested now and it remains to be seen how he responds to the same. Iyer has so far scored 331 runs in 11 matches and should carry the team’s batting for the rest of the season.

Also read- ICC World Cup 2019: 5 Players who have the ability to hit 200 in the tournament

Stoinis took his time to start performing and now is the vital cog in RCB’s wheel. He is also bowling a few overs and with Moeen Ali no more in the team, he will have to take up the load. He is in great form with the bat and played superbly with De Villiers in the previous game. If a specialist bowler has a bad day, Kohli will definitely turn to Stoinis and the Australian will love to make an impact in that aspect.

The prediction is for the chasing team to win the match and toss will play an important role. 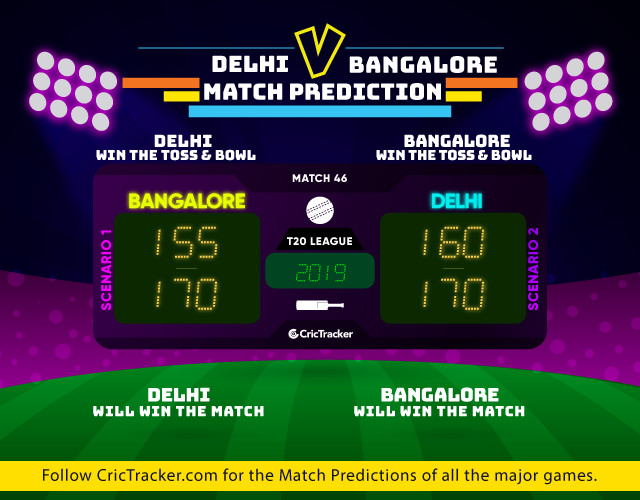