Hosts Delhi will go in with the same line-up while Kohli's men will bring Heinrich Klaasen for all-rounder Moeen Ali.

Indian Premier League (IPL) is in its razzmatazz phase. Just take note, only a couple or three matches to go for each team but none of the team has officially made to Playoffs. In a crucial juncture, Delhi Capitals, the lucky-go-happy team will be locking horns with lowly placed Royal Challengers Bangalore. Delhi Capitals will be playing at home, Feroz Shah Kotla but interesting that is the reason they wary about. Of 11 matches they five at home but the Shreyas’ men have a meagre win per cent at the Kotla, winning only two. Delhi Capitals are challenging the big teams like Chennai Super Kings and Mumbai Indians on top of the points table.

On the other hand, Royal Challengers Bangalore is trying their best to cling on to Playoffs race but seems like the hapless side will be left out. Of the 11 matches, they won only 4 matches standing last on the table. There is no bigger achievement for RCB if they can gather all the strength and win all the rest of the matches. A one-match star, Dale Steyn being injured they might again lack sheen in the bowling department.

Also, their main all-rounder, Moeen Ali, who was instrumental in RCB’s wins have left to England for England World Cup camp. The question arises if they can churn out winning results their best players in the line-up. Moeen Ali might be replaced by the 27-year-old South African batter Heinrich Klaasen.

Delhi Will be playing with the same team they played against Rajasthan Royals. They have been too good with the existing team as their journey from rock bottom to top four has been eye catchy this season. Considering the Kotla pitch to be in favour of the medium pacers and spinners.

Of late, Axar Patel has been consistent with the ball as he picked a wicket or two in the last three matches. Rabada being at his prime form is expected to continue the destruction. The top order is expected to continue its onslaught but again depends upon how they can build partnerships. Rutherford is being a bit disappointing in the last two matches he couldn’t pick up wickets.

RCB is also good to go with the same team but they are forced to bring in Heinrich Klaasen in place of Moeen Ali as the latter left to England. So far, it has been a tremendous scenario for Navdeep Saini, Yuzvendra Chahal, AB de Villiers and Virat Kohli. With Marcus Stoinis is in good touch in the last match, he is expected to do good with the ball as well. Klaasen will be in the spotlight as he played only match so far for RCB. This is the time for the Proteas batsman to prove this mettle.

Toss Update: DC won the toss and opted to field 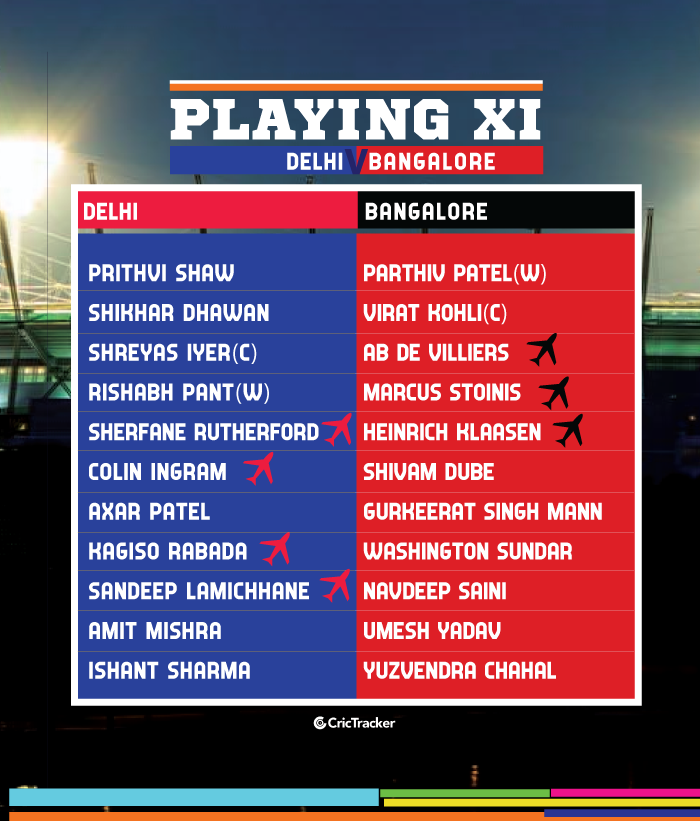 The experienced southpaw is hogging the limelight and has received accolades for the way he is shouldering responsibilities for the underdogs. His dogged performances are worth shedding light on. Dhawan has 400 plus runs in 11 matches. He will be a trump card to give a good opening for their innings.

He has two back-to-back 50s in his kitty. She has shown the team can they can bank on experienced players as well. The Delhi side is filled with colts in which Dhawan is the odd man out. Against RCB, Dhawan is expected to pump his heavyweight bat in air to cover cow corners of the Kotla. A lot depends upon an opening knock though.

The captain-cum-principal wrecker will be shaped up well to face the sturdy Delhites. After his noteworthy century against Kolkata Knight Riders, Kohli has been a bit dull with the bat. Now to keep the team afloat for playoffs spots, it is important for the skipper to give his best.

In the last two matches where the Bangalore side defeated CSK and KXIP at home, his contribution was not much. But, he might strike right cords because his willow has yielded a good score in the away matches for the team. His one century this season came away from home and his couple of the 50s also came in the away matches. So, Kohli might punch above his weight to bring back his binge of beating with the bat.

414 – AB de Villiers is the highest run-getter for RCB and fifth among overall players with 414 runs.