Mumbai have won eight consecutive matches against Kolkata in the IPL.

After six consecutive defeats in this Indian Premier League (IPL), Kolkata Knight Riders (KKR) just don’t seem to find a solution to ending their misery. For Dinesh Karthik & Co. it has come to a stage where another defeat will pull the curtains down on their campaign. To make things worse, their next contest is against the Mumbai Indians (MI) at the Eden Gardens in the second of Sunday’s doubleheader.

Kolkata last won against Mumbai way back in 2015 and ever since lost eight matches in succession. In this edition’s IPL, the form of both teams has been contrasting. Even as KKR are gasping for breath in the sixth position of the table, Mumbai are handsomely placed second. While it can be said that Rohit Sharma’s men are the clear favourites, one can’t count out a team like KKR at any stage of a league.

The pitch at the venue in Kolkata has turned out to be a bowlers’ graveyard thus far. Even scores of above 200 don’t look safe anymore. Moreover, the short boundary has turned out to be a massive headache for the teams. Another cracker of a deck can be expected tomorrow. Batting second has to be the way forward on the batting paradise.

The temperature will hover between the 29 degree Celsius and 30 degree Celsius during the match and that won’t be much of a concern for the players. However, the humidity percentage will be on the higher side with the numbers extending to 79.  Nevertheless, the bowlers will have to contend with the effect of dew that will play a crucial role in deciding the result of the game.

The Knights may sideline Carlos Brathwaite and hand Matthew Kelly his IPL debut. Carlos hasn’t had much to do either with the bat or the ball. Even in the last match, he bowled only two overs and got out cheaply. Also, it will be interesting to see where KKR send Sunil Narine to bat. He was sent at the middle order, but could only get 11 off eight balls. Kuldeep Yadav may get a chance in place of Prasidh Krishna.

The Queenslander has scored three half-centuries in 11 games and has notched 264 runs at an average of 26.40. Nevertheless, he has also been guilty of playing some rash strokes and that has led to his dismissal on quite a few instances. Last year, the 28-year-old Lynn had scores of 17 and 21 against Mumbai, but this time he would be keen to contribute with a substantial knock.

The wicketkeeper-batsman is Mumbai’s leading run-scorer this season with 393 runs from 11 matches at an average of 35.72. Barring one match here and there, the Proteas cricketer has given his team decent starts on every other instance. He doesn’t mind playing his strokes inside the field restrictions and the approach has paid dividends. His last four scores at the Wankhede reads 40, 81, 24 and 4. 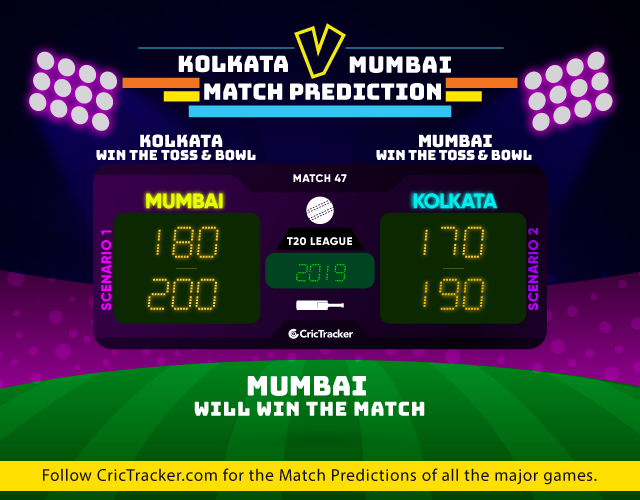