For the visitors, there won't be any changes but Kolkata Knight Riders might bring in Kuldeep for Prasidh Krishna and Matthew Kelly for Carlos Brathwaite.

Kolkata Knight Riders was the top contenders to flag off their supremacy in the Playoffs back when the league started this season. But as the league proceeded, they rolled down the hill. They stooped down to a level where the fans seem to contemplate a lot to watch their matches. Players have been foul-mouthed by the fans. What brought to them that grade? Dependency on a single player <Andre Russell>. They botched up many chances instead of taking the matches to victory.

In most of the matches, fans could spot the players on-field lethargic behaviour. The players seemed like they were not interested in playing. Finally, after 11 matches, they find themselves staring down the barrel. This weekend clash against Mumbai Indians will decide if they can make an upthrust with a win or perish themselves with another wretched performance. Can Knights chin up in their den or will they hang the heads down? It’s important for other players to stand for the team cause.

Mumbai Indians on the other end, are on a high with a win against arch-rivals CSK. The IPL juggernauts have put their strongest leg in the Playoffs. They are standing second with seven wins with 14 points on the points table. The top order has been a boon for the Mumbai side.  The proteas wicketkeeper-batter Quinton de Kock has been a boost for the batting order while the Pandya brothers in the middle are being fantabulous.

In the bowling department also the Pandya brothers are doing well. Sri Lanka veteran Lasith Malinga who was a mentor last year has played a couple of matches this season again he has been an added advantage.

There has been a lot of hovering around the line-ups in different matches for Kolkata Knight Riders. Chris Lynn and Sunil Narine have opened most of the matches but they could only build an opening partnership in one match. Now from the previous match, Shubman Gill has opened but he couldn’t amalgamate well with Lynn to heap a mountain like a score. Their main problem lies in the batting top order and bowling department. Alike opening pair the purple outfit’s skipper Dinesh Karthik has tried a lot of new bowlers in various combinations of late but didn’t seem to work out.

Prasidh Krishna has played 10 matches but could only pick 3 wickets so they might bring in Kuldeep Yadav. After getting thrashed by RCB’s Moeen Ali, Kuldeep was rested for two matches but the Chinaman has picked up 4 wickets in 9 matches. There might be more spin options as Eden Garden pitch suits spin much. There is a possibility of bringing in Matthew Kelly in place of Carlos Brathwaite after the latter failing to pick up at least a wicket in two matches.

Mumbai Indians are afresh from a win and is on Cloud9 after defeating juggernauts Chennai Super Kings. As a team, Mumbai has been outstanding and the results have been fruitful in return. Evin Lewis played his first match in the previous game this season and he seems to be in good touch. he scored 32 off 30 balls with the help of 3 boundaries and a maximum. Pandya brothers have been in good form. The Mumbai side has racked up good all-rounders in the name of Pandya brothers.

Also, Mumbai has holes which the players themselves should meet expectations to plugged in. Caribbean All-rounder Kieron Pollard has been showing weak performances leaving only an unbeaten 83 when he was the skipper. Also, Jasprit Bumrah is good with the seam and pace as he picked up 13 wickets in 11 matches. Anukul Roy played only one match against CSK so far in which his bowling figures read 2-0-11-1. Anukul might come in a spot early for the next match.

Toss Update: Mi won the toss and opted to field 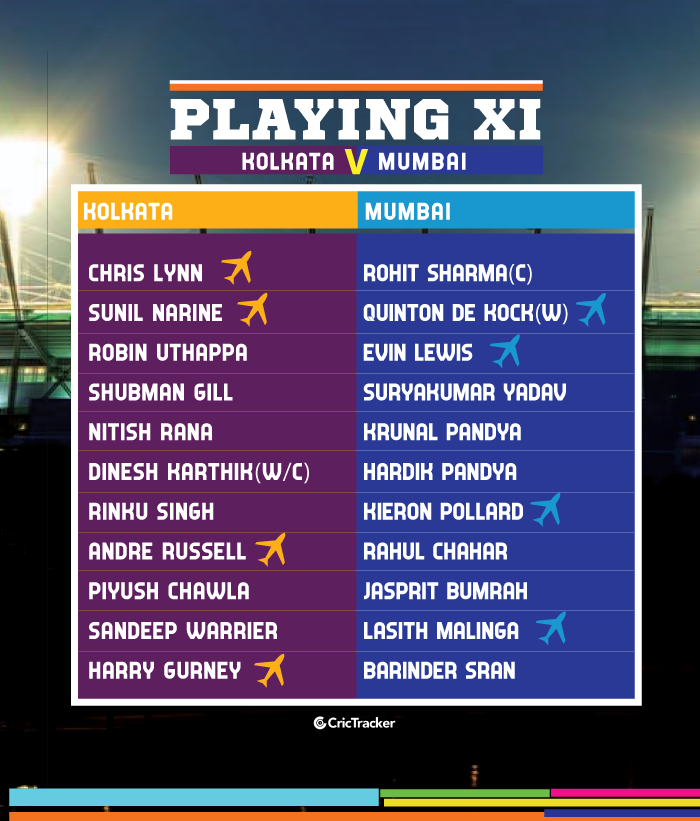 The Eden Gardens stands will flock on Sunday not because it is a weekend but to cheer their team which is in grave trouble. Knight Riders fans would be looking forward to Chris Lynn’s good performance. So far Lynn played 10 matches and scored 264 runs, but only one innings which was eye catchy. He has outstanding performances this season but only one came at home. He scored three 50s out of which only one match they could win. The Australian batter should prove his prowess to give respite for the team.

Suddenly into the limelight, Mumbai’s skipper Rohit Sharma scored a 67 against Chennai Super Kings which was his first 50 this season. Seems like he is in good touch and is in form. The India opener gave a good kick-off and his stand with no. 3 Evin Lewis was noteworthy. There can be another bombastic show from the skipper at Eden Gardens.