Punjab have beaten SRH only once at the RGI Stadium in Hyderabad.

Only one week of the round-robin stage in this edition’s Indian Premier League (IPL) remains, and teams are still fighting their hearts out to progress to the playoffs. Two of them are the Sunrisers Hyderabad (SRH) and the Kings XI Punjab (KXIP), both of whom are stuck on 10 points from 11 matches and need to win their remaining four matches in order to avoid getting into the complications of the Net Run Rate.

As far the Sunrisers are concerned, yesterday, the team, captained by Kane Williamson, slumped to a seven-wicket defeat to the Rajasthan Royals (RR) in Jaipur and that has put their campaign in the doldrums. Having lost Jonny Bairstow, their batting looks a tad thin, however, the positive sign for them is the way the middle order has started to show signs of improvement in the last few matches.

Coming to the Punjab-based franchise, the team hasn’t won many in the last few matches and needs to pull up its socks at the earliest. KXIP are coming off a drubbing against the Royal Challengers Bangalore (RCB) at the M Chinnaswamy Stadium. Ravi Ashwin’s men are in a deeper hole than the Sunrisers owing to their negative NRR. In their last meeting, Punjab edged Hyderabad in a humdinger in Mohali.

The Sunrisers may not tinker with their combination after the loss. Manish Pandey, scoring half-centuries in back-to-back games is a good sign. The onus will be on captain Williamson to get a decent knock under his belt. Siddarth Kaul went at an economy of 12 against RR and he will want to make amends. Needless to say that SRH will look up to Warner to come good yet again.

Punjab may bring in Sam Curran in place of Hardus Viljoen, who went for 51 versus RCB without a wicket. Curran is a more potent batsman than the South African Viljoen. Gayle and Rahul have given the team good starts and the duo will be needed to do the same again. On a strip that assists spinners to some extent, the role of the Ashwins- Ravi and Murugan will be important. 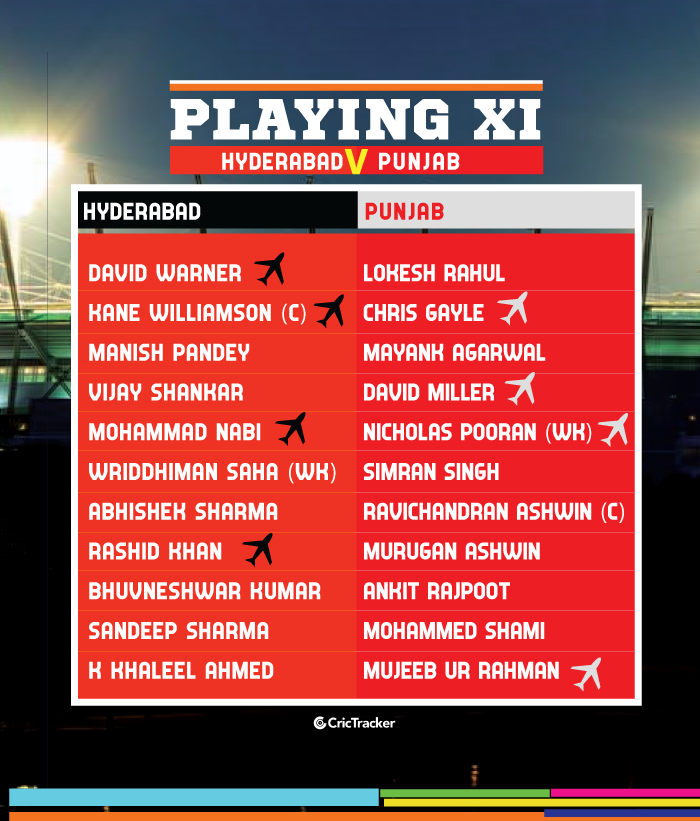 The Tauranga-born was SRH’s linchpin in the batting lineup last season and was their top run-scorer. However, this edition has only seen him score 41 runs in five matches at an average of 10.25. Last match, he made his comeback after attending his grandmother’s funeral. At home, SRH will be hoping for the experienced campaigner to come good in the upcoming contest.

More than his brute force, the Jamaican has shown consistency this season. In KXIP’s last six matches, he has got into the double-digits every other time. The 39-year-old batsman has also been scoring those runs at a high strike-rate. The SRH bowling isn’t in the greatest of form and on a batting-friendly wicket, he will have another chance of scoring big and take his team to a commanding position.