Here we look at the players Rajasthan Royals could go for at the auction.

Rajasthan Royals returned to the IPL in the 2018 edition and did a good job at the auction where they bagged a couple of costliest players of the season. Some of those players ended up settling with far from their previous season returns but the Royals managed to make it to the playoffs before crashing out in the Eliminator game. Steve Smith, the only player who RR retained prior to mega auction for 2018, was supposed to lead the team.

However, the Cricket Australia‘s (CA) ban ruled him out of the season but could return to lead the team in 2019. With a purse of INR 20.95 crores, the Rajasthan can buy as many as nine players including three overseas recruits. They will now have a great chance of capturing some of the players on demand in the auction with the salary cap in their hand.

Here we look at the players Rajasthan Royals could go for at the IPL 2019 auction:

Rajasthan’s purse can assure them at least two big picks during this IPL 2019 auction on December 18. The franchise will be eyeing to buy some dynamic overseas batsmen. They already have the likes of Jos Buttler and all-rounder Ben Stokes but there is a chance that England players will not be available for the full duration of the tournament. This can force them to look at someone like Windies sensation Shimron Hetmyer.

The left-hander is expected to be among the top buys this season and the Royals have enough in the bag to bag the youngster. RR can also go after Colin Ingram who developed into a monster T20 batsman ever since he took up the Kolpak deal. Royals roped in the Afghanistan left-arm wrist spinner Zahir Khan last year but he got injured before making his debut. The franchise could sign him back after his recent success at the T10 league which was dominated by the batsmen. 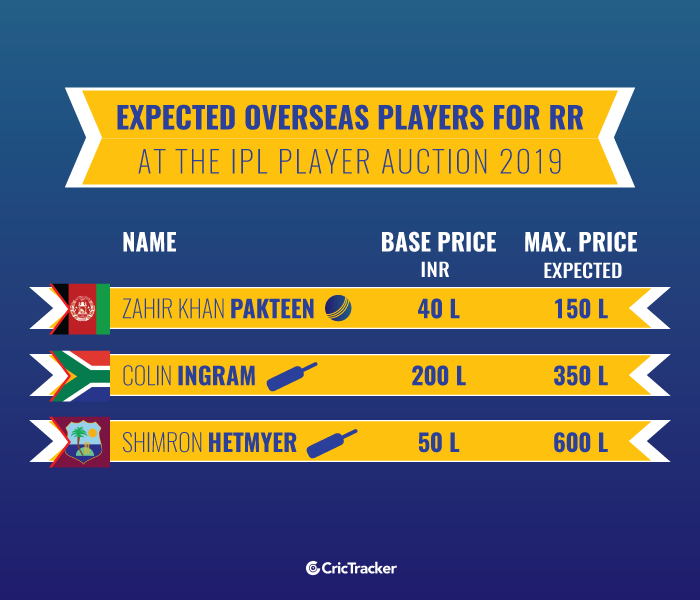