A total of Rs 17.75 crore were spent on England's seven players in the auction.

All the eight squads are finalised for the Indian Premier League (IPL) 2020 season. A glittering auction event took place on Wednesday in Kolkata and as many as 62 players were sold while 64 went unsold. The other 212 players’ name never came up in the auction, unfortunately. However, it was Australian cricketers who enjoyed their day with Pat Cummins being the most expensive player at the auction.

The Kolkata Knight Riders (KKR) entered the bidding war extremely late and ended up securing his services for a whopping Rs 15.5 crore. Glenn Maxwell was the next in the list of most expensive players and a total of 13 players from Down Under went to different teams. It was the Aussies’ day out in the auction as the franchises splurged the most Rs 57.25 crore on them.

A total of 33 Indian players sold at the IPL auction

Among 62 players which were sold in the IPL auction, 33 were Indians and most of them were uncapped players. Majority of the cricketers were picked up at their base price and it was no surprise that the second most money was spent on the local players. Piyush Chawla was the most expensive Indian player with the Chennai Super Kings (CSK) securing his services for Rs 6.75 crore.

The likes of Yashasvi Jaiswal, Virat Singh and Priyam Garg generated a decent amount of interest among uncapped players and it was good to see the young talent getting its due. Among England cricketers who were shortlisted for the auction, seven of them were sold with the first being their limited-overs skipper Eoin Morgan. After an intense bidding war, the Kings XI Punjab (KXIP) managed to snap him up for Rs 5.25 crore.

The most attractive player ahead of the event, Tom Banton literally didn’t receive any bids before the KKR got him in a steal deal for just Rs 1 crore. Sam Curran was the other England player in demand who will turn up for the CSK next season. A total of four West Indies and three South Africa players were sold in the auction as well with Sheldon Cottrell and Chris Morris earning the most among them.

Sri Lanka and New Zealand fans witnessed a solitary player being sold from their country each. Isuru Udana and James Neesham will ply their trade for the RCB and KXIP respectively in IPL 2020. 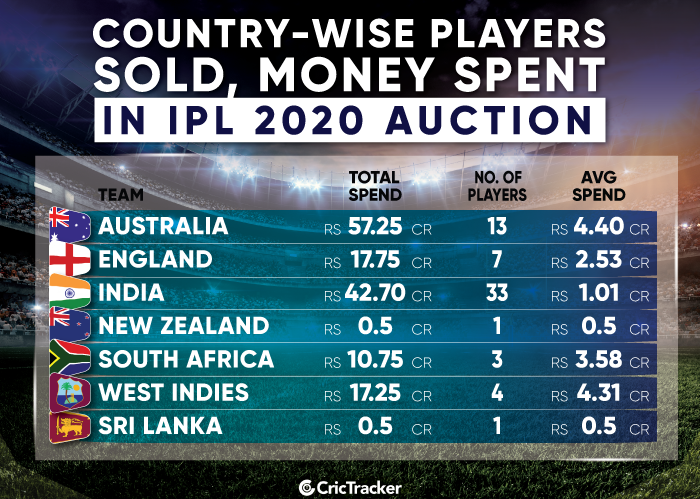