The clash with Royal Challengers Bangalore on November 2 in the Sheikh Zayed Stadium, Abu Dhabi will mark the end of Delhi Capitals campaign in the league stage.

Changing the name of the franchise from Delhi Daredevils to Delhi Capitals had indeed changed the fortunes for the team as they had a monumental season last year. The team had finished third on the points table, their first outing in the semi-finals after 2012 season, and will be hoping to carry forward the momentum gained this year too in the grounds of Dubai, Abu Dhabi and Sharjah.

The Delhi-based franchise has the resources needed to do so, and only need to get their act together on the field now. The team has great depth in their batting line-up with the likes of Shikhar Dhawan, Rishabh Pant, Shreyas Iyer, Shimron Hetmyer and Marcus Stoinis.

The bowling department also looks lethal with the presence of Indian spinners like Amit Mishra and Axar Patel along with pacers like Ishant Sharma, Kagiso Rabada and Anrich Nortje.

The addition of the swashbuckling batsman Ajinkya Rahane and veteran spinner Ravichandran Ashwin will also prove beneficial for the team on the grounds of UAE as the Capitals will be looking forward to registering their maiden title in the cash-rich league.

The Delhi Capitals will kick off their campaign for the 13th edition of the Indian Premier League against the KL Rahul-led Kings XI Punjab on September 20 in Dubai followed by a fixture against Chennai Super Kings on September 25 on the same ground. Delhi will en route to Abu Dhabi for a match against Sunrisers Hyderabad on September 29 before travelling to Sharjah to take on Kolkata Knight Riders on October 3.

In their 10th match of 2020 edition, the Delhi-based franchise will face KXIP on October 20 in Dubai followed by a clash against KKR on October 24 in Abu Dhabi. Then, the team will take a bus to Dubai to play two consecutive matches against SRH and MI on October 27 and October 31 respectively. The clash with Royal Challengers Bangalore on November 2 in the Sheikh Zayed Stadium, Abu Dhabi will mark the end of Delhi Capitals campaign in the league stage. 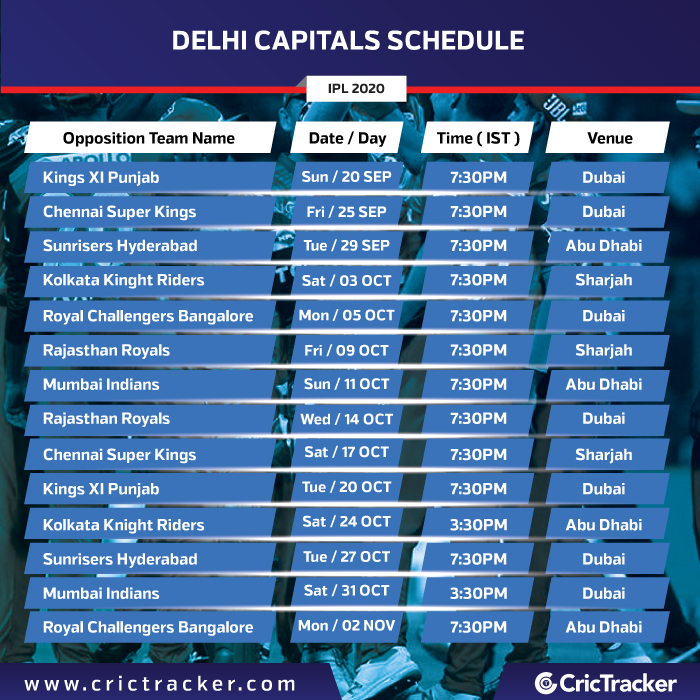