Ravichandran Ashwin won his 3rd player of the match award in the IPL.

Delhi Capitals’ sensational run in the IPL 2020 continued as they registered their 5th victory in only six matches to top the points table. Sharjah Stadium didn’t produce the best of the tracks for the batters as only 322 runs were aggregated in the match. A collective bowling effort from the Delhi Capitals saw them register a 56-run win in RR vs DC. All the six bowling options used by Delhi picked up at least one wicket helping them to earn an impact of 3 and more.

The highest impact was recorded for Ravichandran Ashwin who earned 8.58 for his 2/22 including the wicket of Jos Buttler. Ashwin ended up winning the player of the match only the 3rd time in his IPL career. The feel of batting in Sharjah came from only Prithvi Shaw among the Delhi Capitals’ top-order as the young opener hit three boundaries for his 10-ball 19. Rishabh Pant crawled to five runs in nine balls before getting run out in a bizarre way. 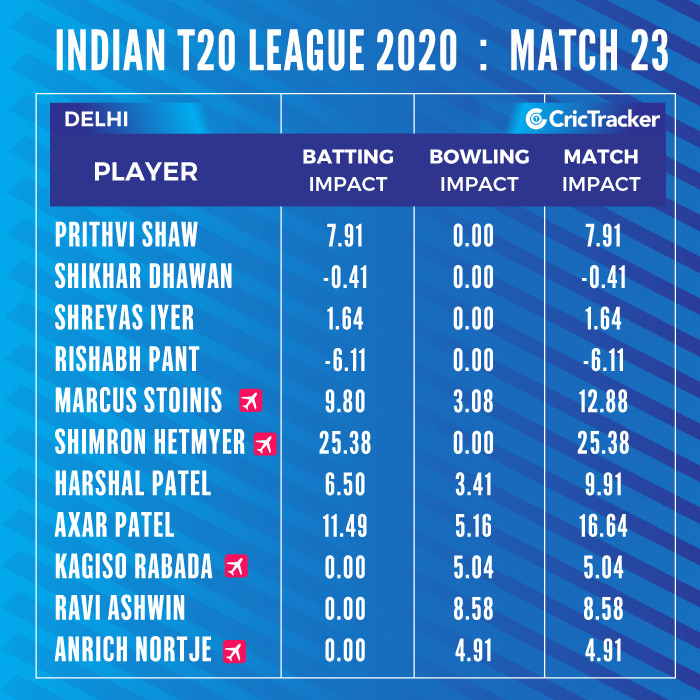 He ended up registering the worst batting impact for the Delhi Capitals of -6.11 which also turned out to be the worst match impact for any Delhi player in RR vs DC. Shimron Hetmyer’s 24-ball 45 while batting at six held the highest impact during RR vs DC with a rating of 25.38. The slowness in the track did trouble the Rajasthan Royals’ batters as well who couldn’t even achieve a run rate of seven. Among the Indian players, only Rahul Tewatia scored at a strike rate over 100.

He struck 38 from only 29 balls with five boundaries and earned an impact rating of 14.11. The Southpaw did earn an impact of 4.66 with the ball for his economical spell of 1/20 which helped them to finish the match with an impact rating of 18.77; more than twice the second-best for the Royals. Jofra Archer was the star performer with the ball picking up three wickets while conceding only 24 runs in four overs. He ended up earning a bowling impact of 9.5 which was the best during the RR vs DC. 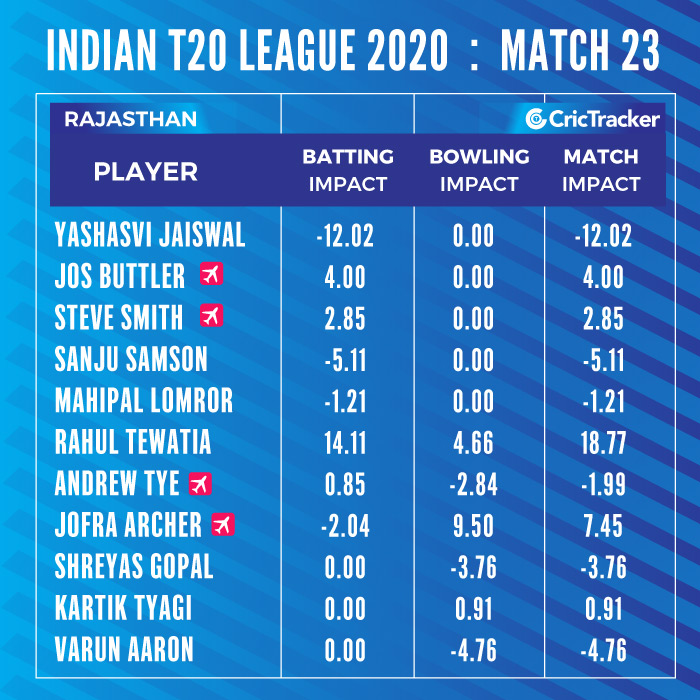