Sunrisers Hyderabad confirms their playoff berth with a comfortable win during SRH vs MI.

Sunrisers Hyderabad entered the playoffs without any major hiccups in the last league phase match of IPL 2020 against the Mumbai Indians. In a must-win match, the Sunrisers got benefited by the fact that Mumbai decided to rest some of their big names in the bowling department. SRH made full use of the absence of Trent Boult and Jasprit Bumrah after a collective performance with the ball which restricted Mumbai to 149/8. The attacking knocks by David Warner and Wriddhiman Saha during SRH vs MI made the chase look quite comfortable.

Warner scored an unbeaten 85 from only 58 balls while Saha finished with 58 off 45 deliveries. It was not a surprise that the SRH skipper’s performance on Tuesday night earned the highest match impact of the SRH vs MI game. Warner earned an impact rating of +11.65 as per CricTracker’s Match Impact Ratings. Kieron Pollard came close second for his rescue act for the Mumbai Indians yet again. Pollard struck four maximums and two fours during his 25-ball 41 without which MI might not have reached even 130. 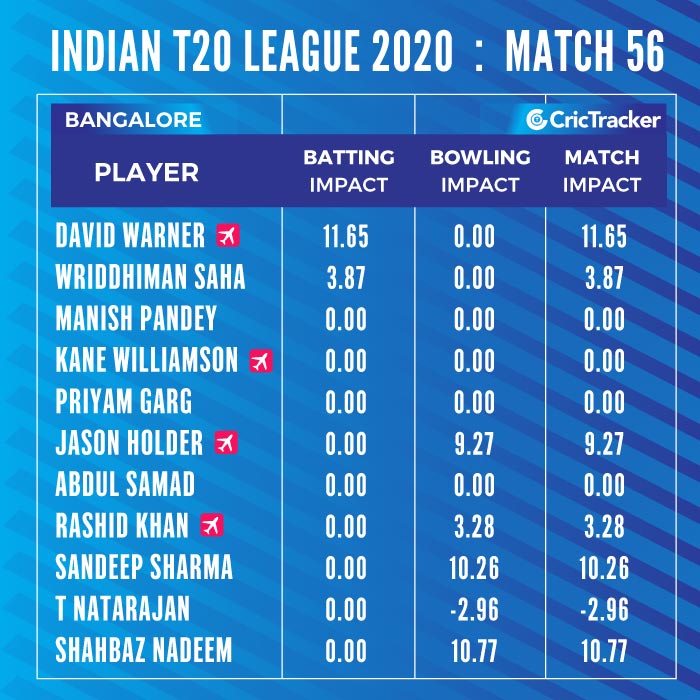 Pollard’s batting performance got him an impact rating of +11.64 which is only 0.01 behind that of Warner during SRH vs MI. Only one other player in the whole game produced a decent impact for Mumbai Indians. It was Quinton de Kock who started with two fours and two maximums during his 13-ball 25 at the top. The short cameo from the South African got him an impact rating of +8.72 which is the 3rd best batting impact of the game. MI bowlers barely had an impact as none of them managed to pick a wicket.

Sandeep Sharma once again delivered with the ball for Sunrisers Hyderabad as he picked up three wickets including both the openers in the powerplay itself. It got him an impact rating of +10.26 which was bettered by only one bowler during SRH vs MI. It was the left-arm spinner Shahbaz Nadeem who finished with analyses of 4-0-19-2 on Tuesday. Nadeem picked two wickets in an over when MI was firmly placed at 81/2 after 11 overs. The bowling performance got Shahbaz and impact of +10.77 and also the man of the match award. 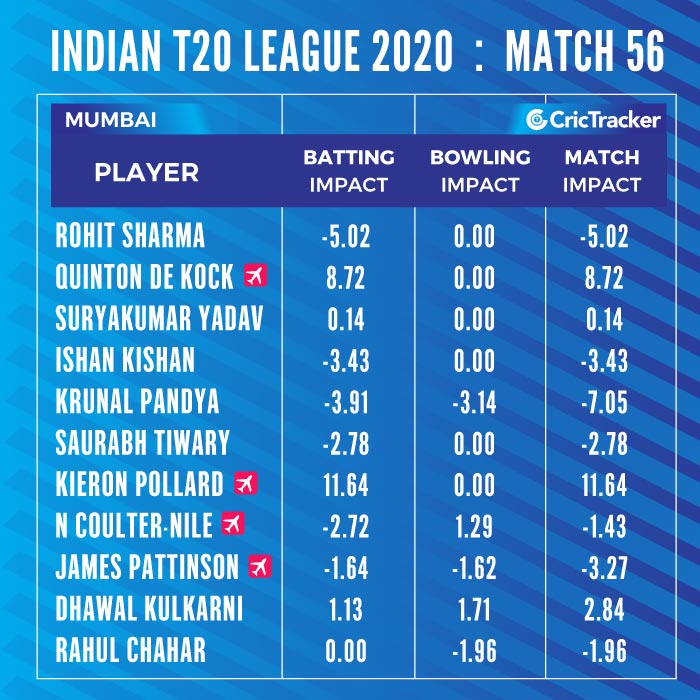