Franchises are expected to be very specific about their picks depending on their needs.

The upcoming auction for the IPL might be a small one in terms of the number of players who can be picked and the amount that can be spent. But by no means, this mini-auction has lost its essence. In fact, it is as important as any other IPL auction given the time at which it comes. There will be a mega-auction before the IPL 2021 season. Thus, teams will have to figure out their core once again; not only keeping the emotions in mind but also keeping an eye on the future.

The talents whom they’d pick on 19 December 2019 could be the stars for the future. Talking of talent, there is so much of it everywhere which could be quite tempting. But there are specific needs the eight franchises would want to address. It has been like that for some time now and the teams have been extremely smart with their picks at the IPL auctions. You could expect something of similar sorts this time as well and here is how franchises would want to possibly shape up at the end of the process.

Here are the specific gaps that the franchises will look to plug in:

Like always, the Chennai Super Kings looked pretty much sorted and will be able to go forward even without this auction. But there are some areas which are a slight concern for them. For most of IPL 2019, they went ahead with only three overseas options. With the purse that they have, it wouldn’t be a surprise if they decide to invest big on one of the overseas all-rounders or bowlers. Since the Chennai pitch is quite slow, Jaydev Unadkat should make a good choice at least for the home games.

The rest of it could be quite specific. CSK will look to have replacements available for Dwayne Bravo and Shane Watson. Except for the fear of injuries, there aren’t many concerns with the batting. Thus, Chennai could go for a couple of bowlers or all-rounders and a back-up batsman for the middle order. The likes of Pat Cummins and James Neesham could be in their radar. 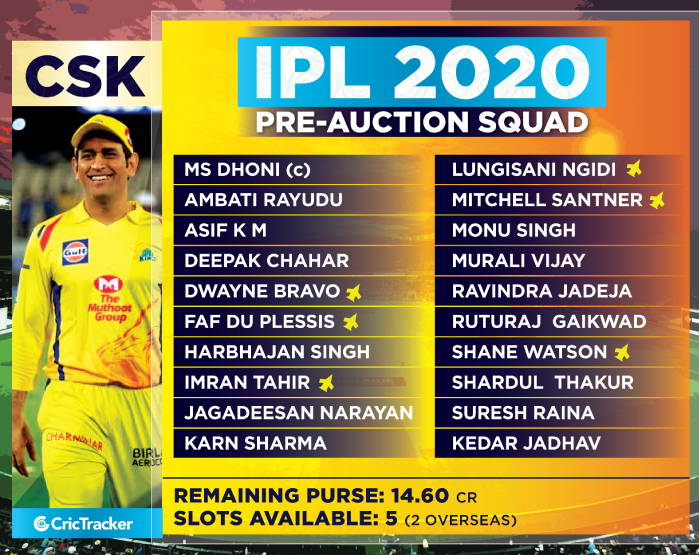