The team batting first is expected to win the clash.

Colombo Stars and Dambulla Giants are set to lock horns in Match No.6 of the Lanka Premier League 2021 on Wednesday, December 8 at the R. Premadasa Stadium in Colombo. Colombo have kicked off their journey on a winning note while Dambulla stand in balance with one win and loss each in the tournament so far.

It was Tom Kohler-Cadmore’s fantastic finish of 45* off 30 balls that pushed Jaffna Kings to an eight-wicket victory over Dambulla in the last game. It remains to be seen if they can come back to winning ways with this game.

The pitch in Colombo was excellent for batting in the first two games. However, the scores came down a wee bit in the third and fourth games. Batting seems to have gotten a tad difficult. But since both teams have power-packed batting units, a high-scoring game can be expected.

Though Perera couldn’t score much in the last game played by Stars, he is expected to come up well in this particular contest. In 123 T20s so far, the Lankan has scored 2712 runs while striking over 130.00

In the last game played by Stars, Danajaya picked two wickets while conceding at a stunning economy of 4.75 and was instrumental in pushing his team towards a four-wicket victory over Gladiators. Hence, he is expected to be the pick of the bowler for the given contest. 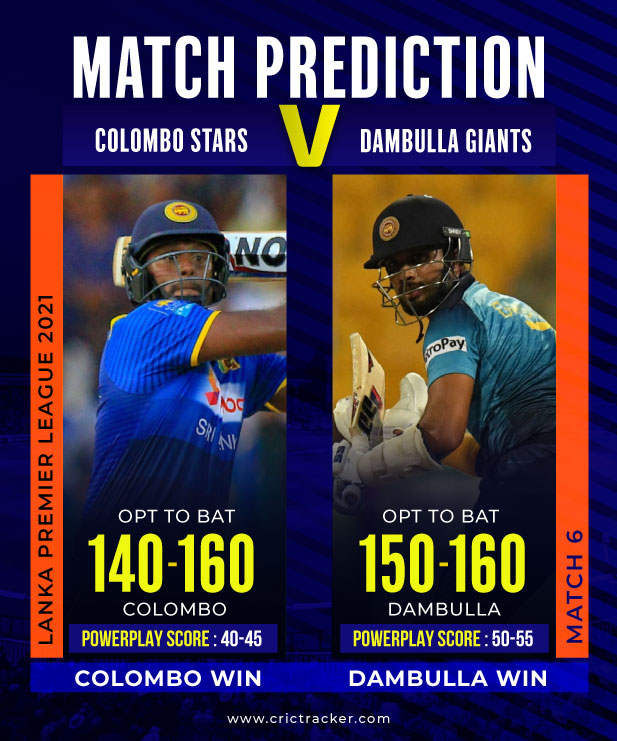