All the records and numbers from Sanju Samson and Kerala created in the game against Goa:

Amidst all the voices around Sanju Samson on his inclusion in the Indian limited-overs side, the Kerala keeper scored an unbeaten double century on Saturday. The 24-year-old scored 212* off 129 deliveries in the Vijay Hazare Trophy game against Goa with 21 fours and 10 maximums.

Samson completed his fifty in only 30 balls and took 36 more deliveries for his hundred which brought an end to his 86-match wait for a List A century. He was well supported by Sachin Baby (127) as the duo shared a record 338-run stand for the 3rd wicket. Kerala ended up with a huge score of 377/3 in their 50 overs and won the game by 104 runs.

All the records and numbers from Sanju Samson and Kerala created in the game against Goa:

1 – Samson also became the first Indian to convert his maiden List A century into a double century. Only three players before Samson converted their maiden List A ton in the 200 but none of them scored as high as 212* which Samson made on Saturday. Alan Barrow is the only player to score a double century List A debut for Natal in the 1975/76 season against South Africa African XI. 212* – Sanju Samson’s unbeaten 212 is now the highest individual score by a wicketkeeper in List A cricket. The previous highest is by Abid Ali who scored 209* for Islamabad in the 2018 National One-Day Cup against Peshawar.

This is also the highest individual score by any player in Vijay Hazare Trophy history surpassing Karn Kaushal’s 202 for Uttarakhand against Sikkim last year. Samson and Kaushal are the only double centurions in Indian domestic one-day games.

10 – Number of sixes Sanju Samson struck during his unbeaten 212; the joint 2nd most by any player in a Vijay Hazare Trophy match. Vishnu Vinod’s 11 sixes against Chhattisgarh earlier this week are the most by a player in a VHT game.

125 – Balls Samson needed for his double century; the fastest double century in List A format by an Indian. Karn Kaushal’s double ton and Shikhar Dhawan’s 248* against South Africa A in 2013 came in 132 balls. Samson’s knock is also the 3rd quickest double-century where milestones data is recorded. Travis Head in 2015 and Ben Duckett in 2016 brought up their double centuries in 117 and 123 balls respectively.

338 – The partnership of 338 between Sanju Samson and Sachin Baby is the first-ever triple century partnership in the Vijay Hazare Trophy history. This also is the highest partnership for any wicket in List A cricket by an Indian pair.

They thus broke the record held by Sachin Tendulkar and Rahul Dravid with a 2nd wicket partnership of 331 against New Zealand in 1999 Hyderabad ODI. Samson-Baby stand is the highest for 3rd wicket in List A cricket as well. The previous highest stand for the 3rd wicket was 309* by Tim Curtis and Tom Moody for Worcestershire against Surrey in 1994. 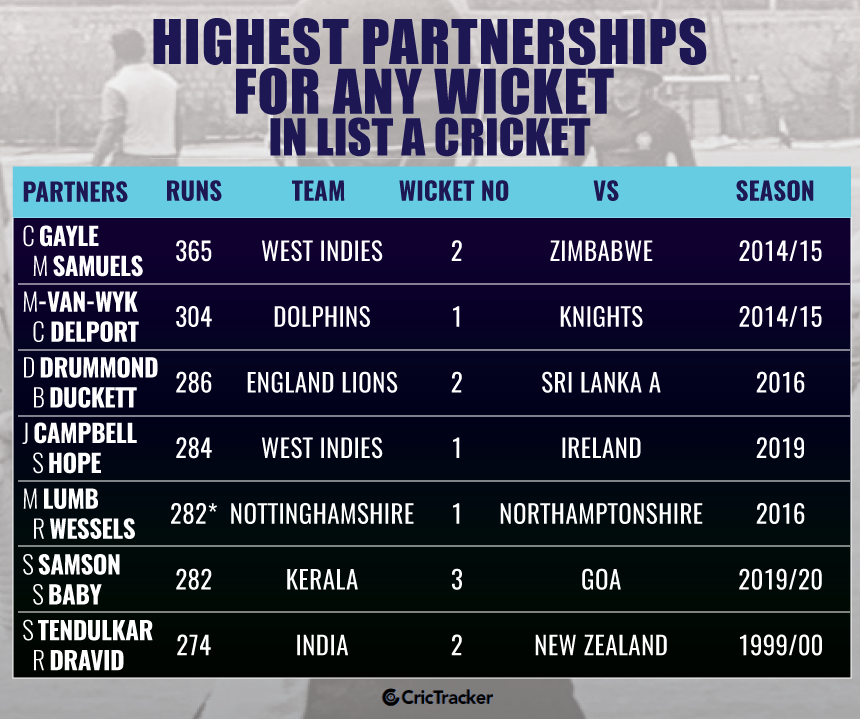