Timothy David has got the experience of playing grade cricket in Australia.

The 5th game of the 2019 Malaysia Men’s CWC Challenge League A will be played between Denmark and Singapore at the Selangor Turf Club in Kuala Lumpur.

This game will be live on CricClub’s YouTube Channel.

Singapore will take on Denmark in the 5th match of the first-ever Men’s CWC Challenge of League A at the Selangor Turf Club. The two teams didn’t make a great start to the tournament as both lost their respective first matches. Singapore, who stormed into the T20 CWC Qualifiers without an unbeaten run at the Asia Qualifiers narrowly lost to Qatar. The Singapore team bowled out in the penultimate over and fell only 20 runs short of the 233-run target.

In fact, fifties from Surendan Chandramohan (67) and Timothy David (75) put Singapore on the top. However, they lost seven wickets for 15 runs when they were requiring 35 runs from seven overs. On the other hand, the Demark let the hosts Malaysia to make a comeback. The home team recovered from 37/4 to finish on 192/7. Later with the ball, they took the last nine wickets for 83 runs to seal a 44-run win.

Scattered thunderstorms are expected on Thursday in Kuala Lumpur. There are good chances of rain during the match timings, especially in the afternoon. The teams can be hopeful of getting a result as at least 25 overs of 2nd innings could happen considering by the weather report.

The game between Canada and Vanuatu was the first List A matches hosted by this venue. The match was a low scoring one but can be said it was due to the quality of Canada bowlers. Both the teams lost quite a few wickets in the first hour which could mean early movement for the pacers.

The Denmark skipper Hamid Shah averages about 25 with the bat and has a strike rate around 25 with the ball. Across all formats, Frederik Klokker scored 4005 runs at an average of 37.42 and also six hundreds. Both the Singapore bowlers Anantha Krishna and Amjad Mahboob have brilliant records as the duo average less than 19 in the matches they played for Singapore. Jonas Henriksen hasn’t got any great record to show so far but has the ability to produce a big knock and take a good number of wickets in the same match.

Timothy David has got the experience of playing grade cricket in Australia. He scored 75 against Qatar in the previous match and smashed 77 against a strong bowling attack of Nepal during the Asia Qualifier for T20 World Cup. 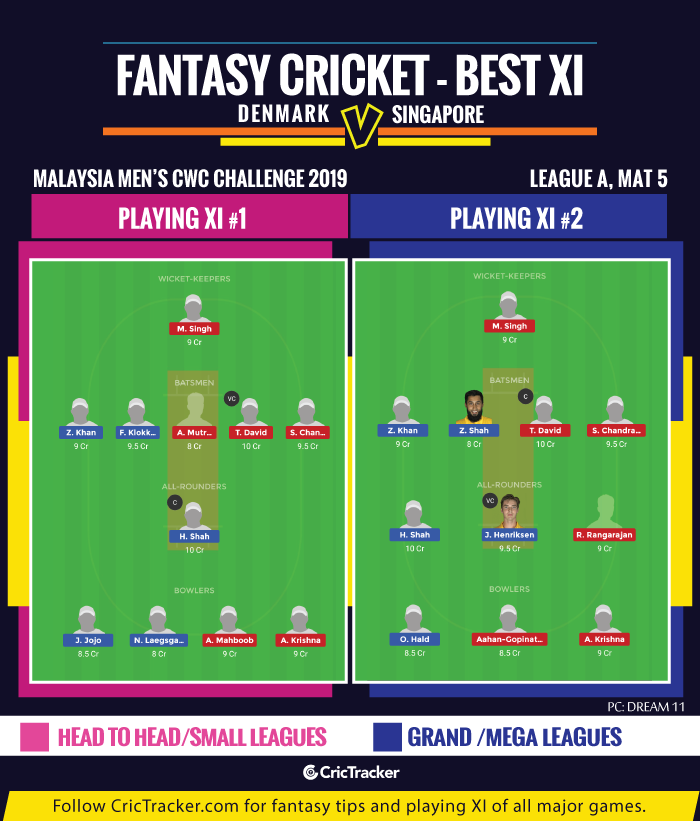 Despite both the teams losing their respective first match, neither of them could be seen making big changes. In case of delayed or no toss update by the close of deadline, the last match XIs can be considered.

Singapore’s batting line-up could earn them their first win of the tournament.