As the MSL 2019 journey is drawing close to its conclusion, the matches are turning out to be more exciting, engaging and competitive. The Match 27 of the MSL 2019 will be played between Jozi Stars and Durban Heat. In the previous two encounters between both the sides, Jozi Stars have been triumphant on both occasions. However, they are currently sitting at the bottom of the table.

Despite Temba Bavuma’s impressive performances, his side has not been able to register a single win in the tournament. Their previous match against Tshwane Spartans was abandoned without a ball being bowled. Stars, who have been disappointing this season, will be eager to register a win in the latter stage of the competition. Temba Bavuma, Reeza Hendricks and Kagiso Rabada have been the highlights of Jozi Stars.

Durban Heat, on the other hand, are sitting fourth in the table. After emerging as an underperforming team of MSL 2019, Durban will be eager to consolidate in the latter phase of the tournament. Skipper Dane Vilas along with David Miller and Alex Hales will strengthen Heat’s batting line-up.

It is an excellent track to bat at the New Wanderers. In the previous game on this pitch, the team batting first was able to amass 171 runs on the board. However, showers are expected during the course of play. The temperature is expected to hover around 18 degrees Celcius according to AccuWeather and there is a 60 percent chance of precipitation.

Jozi Stars will be steered by their skipper Bavuma from the front. He will be assisted by Van der Dussen and Reeza Hendricks to reinforce their batting line-up. Hendricks, who has been in sublime touch lately, scored 74 runs off 53 balls in his previous match. Their bowling force will be guided by the likes of Kagiso Rabada, Aaron Phangiso, and Duanne Olivier.

In their previous match against Paarl Rocks, Durban dominated the game, courtesy their strong batting force. Alex Hales steered his side to a mammoth target of 195 runs. He played an unbeaten knock of 97 runs off just 55 balls. He was also assisted by a quick-fire knock of David Miller. Durban will rely on their strong batting attack to do the job for them against Jozi Stars.

The prediction is Durban Heat to win the match. 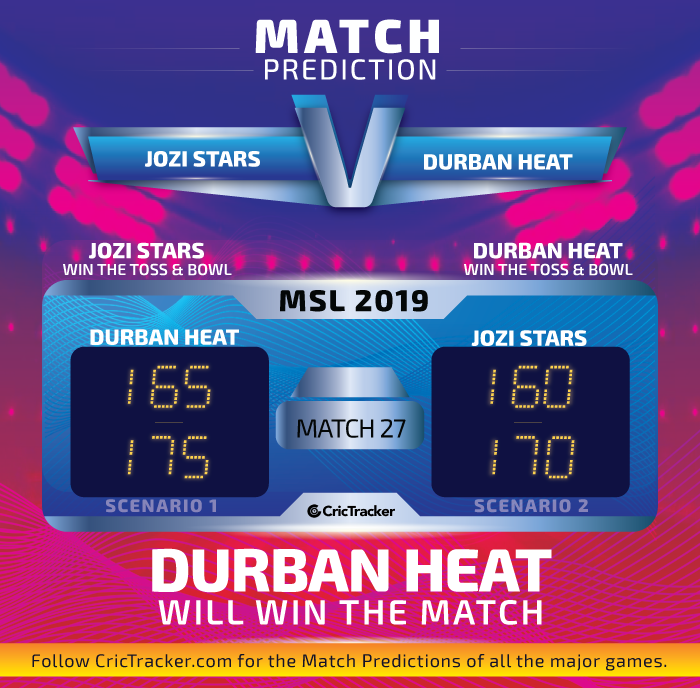