New Zealand will be without Williamson and Taylor both in the first ODI.

The last time Bangladesh travelled to New Zealand, they were beaten quite badly in the three-match ODI series. The hosts had won all the matches comprehensively. But, coming into this series, the Bangladesh head coach, Russell Domingo has shown faith in his side, saying that they can actually beat the Blackcaps in their backyard.

On the surface level, Domingo’s comments might seem a little too optimistic but the South African is fully aware that it is their best chance to win a series in New Zealand. The hosts will be without their captain Kane Williamson and experienced pro, Ross Taylor, who might return after the first game.

With as many as three players expected to make their debuts in the series opener, the hosts might turn up with a vulnerable middle-order in front of the Bangladesh unit. The visitors are also aware that when it comes to winning matches, their record in the ODIs is much superior to that of T20Is and Tests.

Hence, for them playing overseas, it only makes sense to be optimistic in this format. On top of that, New Zealand has not played a single 50 overs match in almost a year. In fact, since the 2019 World Cup final at Lords’, they have played only four matches.

Bangladesh, on the other hand, is without their star all-rounder Shakib Al Hasan. In addition to this, facing Trent Boult, Tim Southee and Kyle Jamieson with the new ball in swinging conditions will a great test of temperament for the Bangladesh top-order. And make no mistake, a Williamson-less New Zealand at home is still a strong side. Tom Latham, who had led the team to a 3-0 whitewash against India at home in early 2020, will once again return to that role.

But, something which will be on the minds of the Bangladesh captain Tamim Iqbal, is getting early strikes. If they can manage to take some quick wickets, the middle-order can get exposed even with Tom Latham, who is a seasoned red-ball opener. Devon Conway, Will Young and Daryl Mitchell, who are likely to make their debut will be challenged against Bangladesh. Even though Latham’s side is inexperienced, they will start as favourites in this series.

As this is going to be a day match, the team winning the toss won’t fancy batting first, fearing the swing which might be on offer early on in the morning. The pitch should be an even one in Dunedin and in a recent T20I, it had produced more than 400 runs. The short boundaries will actually come into play and help the batters to score more freely and quickly. Scoring a minimum of 300 will be key for either team and they would be eyeing that.

Playing Combinations for NZ vs BAN

Even though the New Zealand opener doesn’t have a great ODI record since the 2019 World Cup, his numbers in the recent T20I series against Australia were quite impressive. He has struggled against the new ball at times, but looking at Bangladesh’s new-ball attack, Guptill might fancy himself for getting a good score and carrying on his form from the shortest format.

Mushfiqur Rahim has been one of the most prolific run-getters in ODI cricket in the past few years. He has averaged almost 50 while batting in the middle order and is probably the most important batsman in Bangladesh’s middle order. In the absence of Shakib, it is Rahim’s responsibility to take Bangladesh to a good score will be much more than before.

Today’s match prediction: New Zealand to win the match and take a 1-0 lead in the series. 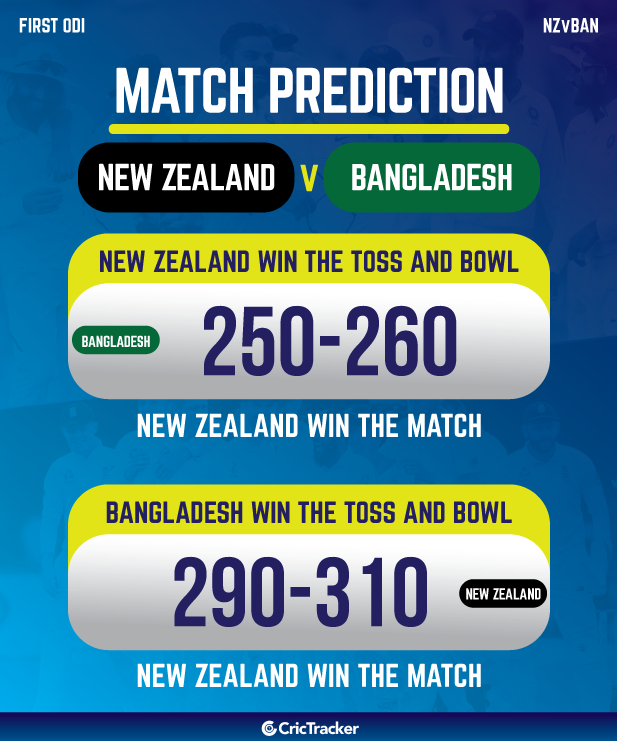