Some showers are expected during the game, though a full match is one the cards.

It is time for all of us to shift gears from franchise-based cricket to some thrilling bilateral international action as the three-match 20-over series between New Zealand and West Indies gets underway on 27th November 2020, at Eden Park, Auckland. While West Indies were in action earlier this year against England for a Test series, New Zealand has been out of action ever since the COVID-bump halted their run in March, when they were playing against neighbors Australia.

Both the teams are not having a full-strength squad as many big guns are out of action due to different reasons. While the Kiwis have rested their regular skipper Kane Williamson and Trent Boult for the T20Is, the Windies will play in the absence of Chris Gayle, Sunil Narine, and Dwayne Bravo. Pollard’s men will also miss the likes of Andre Russell, Lendl Simmons, and Evin Lewis, who all have made themselves unavailable for selection.

Furthermore, for NZ, Colin Munro is set to miss on account of his BBL commitments and that could well mean that the Wellington batsman Devon Conway, who has been scoring truckloads of runs in the domestic set up of New Zealand to join Marin Guptill at the slot of opening. Tim Southee will skipper the side in Williamson’s absence for the first two encounters before he alongside Ross Taylor, and Kyle Jamieson takes leave to join the Test squad.

Some showers are expected during the game, though a full match is one the cards. The overcast conditions will be assistive for the quicks. The weird ground dimensions at Eden Park will certainly come into play. With one of the square boundaries being incredibly small, even mishits on the ground often sail over.

Playing combination for NZ vs WI

The mightily experienced Ross Taylor has a decent record against the West Indies. In 9 innings thus far, the right-hander has accumulated 254 runs at an average of 42.33 and strike rate of 121.53. The 36-year-old had a decent run in the CPL as well and is expected to unleash his aggressive game in the series opener.

The Caribbean southpaw was in blistering form in the Indian Premier League as he amassed 353 runs at 35.30. The most striking aspect of his run at the IPL was his strike rate of 169.71, and given his six-hitting prowess, he would love to exploit the short boundaries at Auckland.

'When he is there at the crease, the scoreboard is ticking' - Ravi Shastri backs Rahul Tripathi to debut in Ireland series

NZ vs WI Head to Head 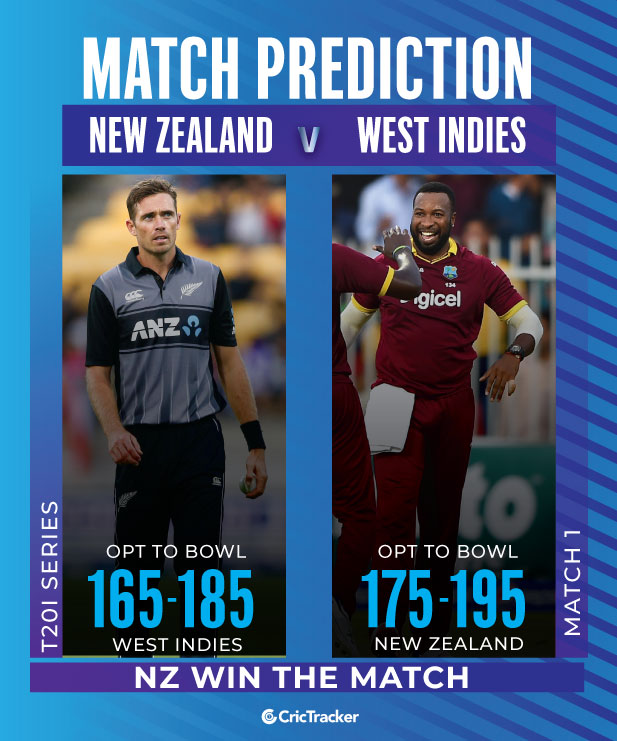