Perth Scorchers are looking likely to get their fifth win on the trot. The 37th match of the Big Bash League (BBL) 2020-21 will be played between Perth Scorchers and Hobart Hurricanes at the Optus Stadium in Perth.

The match is scheduled to start at 01:45 PM IST (04:15 PM local time). It will be live on Sony Ten Network and can be streamed live on Sony LIV.

A couple of weeks ago, Perth Scorchers were looking destined to finish amongst the bottom three in the 2020/21 edition of Big Bash League. However, they have not only turned their campaign around, but are now looking like one of the favourites to confirm their berth in the semi-finals.

Their opposition, Hobart Hurricanes are also favourites to make it to the semis, but their case is a bit different. After winning 5 of their first 7 games, they have taken their foot off the accelerator and have lost their last two games. While they still are placed in the third position, Hurricanes will now have to start picking up wins, for the chasing pack is not far behind.

The weather in Perth has been great so far, and it will remain the same tomorrow as well. The temperature is expected to be around 29 °C while there are zero chances of precipitation.

The Optus Stadium pitch is a batting-friendly one. However, the pitch does help the bowlers as well in the second innings.

Colin Munro is unavailable for this game. Joe Clarke has been called up by the Perth Scorchers.

Mitchell Marsh has been handed a contract till 2025 by the Scorchers, and his numbers will tell you why he deserves that. He has scored 187 runs and has also picked 4 wickets.

For the Hurricanes, D’Arcy Short has had a similar all-round influence. He has scored 141 runs and has also picked up 6 wickets with his spin bowling.

Ben McDermott has been brilliant with both the bat and the gloves. He has scored 299 runs at an average of almost 50 and a strike rate of over 135.

Jason Roy has had a good BBL season so far, having scored 138 runs from 5 matches. He has an average of almost 30, while his strike rate is over 115.

Roy is not the only must-have Englishman for tomorrow’s game, as Dawid Malan can also earn you loads of points. He has scored 175 runs at an average of 35. 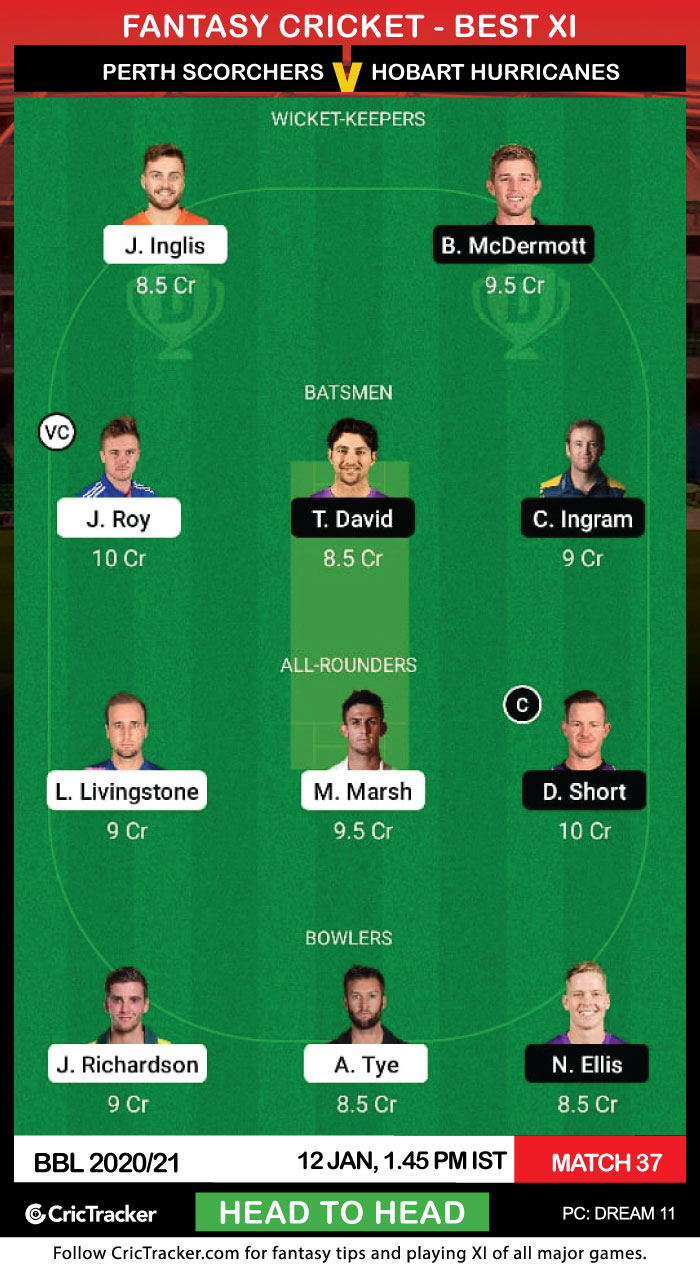 Scott Boland has picked up 9 wickets in as many games. The Hurricanes bowler also has a decent economy rate of under 8 runs per over. He can be a good budget pick at only 8.5 Cr.