Hashim Amla has got a terrific record playing at the Bullring.

It will be an uphill task for Pakistan when they take South Africa on in the four ODI of the five-match series. They already trail in the series 1-2 and will have to win this game to keep the series alive. However, it is not going to be easy as the Proteas will be donning their lucky Pink jerseys.

The home team has never lost a Pink ODI thus far and they’ll hope to keep the tradition of winnings these games intact. A win here will also seal the series for them with one match still left. After that fortunate victory in the 3rd ODI, the South Africans wouldn’t want to let things go off their hands easily.

The fourth match of the five-match ODI series between South Africa and Pakistan will be hosted by The Wanderers Stadium in Johannesburg.

It is a nice pitch to bat on at the Wanderers. There are high scores usually put up at this venue. Also, there will be some bounce on offer for the bowlers. The pitch should remain the same throughout the game. There is rain prediction in the afternoon and in the night.

Shamsi is expected to make way for Tahir while Rabada could be rested for Pretorius.

Dale Steyn has been brilliant since his comeback in the ODI format last year. The pacer accounted for 14 wickets in just six matches at an average of 13.21 and a strike rate of 22.5. His economy rate of 3.52 is one of the best amongst the South African bowlers in this period. He could be your power pick for this match.

Rassie van der Dussen and Reeza Hendricks can be the captain/vice-captain considering their form in the ongoing series. You can also pick Hashim Amla as the captain of your side owing to his record at J’Burg. The right-hander has scored 411 runs in 7 innings at the venue including two centuries and one fifty.

The alternative options for captain are Imam-ul-Haq and Mohammad Hafeez. If are you looking at other options for the vice-captain, you can pick one between Dale Steyn and Andile Phehlukwayo.

Also Read- South Africa vs Pakistan, 4th ODI, Preview: Proteas in Pink aim to seal the series at the Wanderers 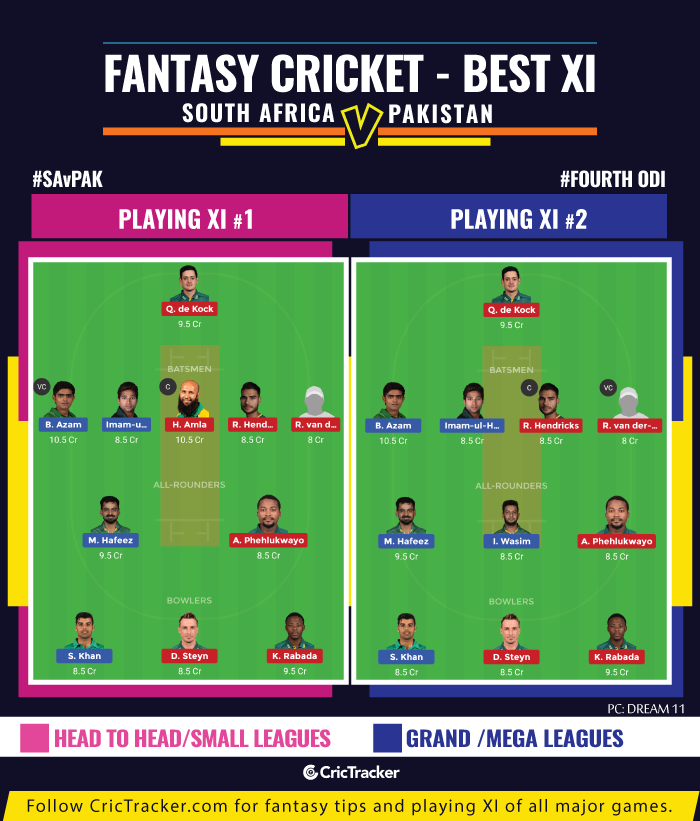 In two of the three matches in this series, South Africa have not batted further after the number four batsman. Therefore, picking the likes of Amla, Hendricks and Rassie Van der Dussen will be the best option as they are highly likely to get a go out there in the middle.

South Africa is expected to win the match and with that the series as well.