The Proteas have been clinical with the bat and ball and have clinched the series 2-0.

The third match of the three-match T20I series between Sri Lanka and South Africa is set to take place on Tuesday, September 14 at the R Premadasa Stadium in Colombo. The Proteas have already sealed the fate of the series, having won the second game on Sunday by a margin of nine wickets.

After electing to bat first, the Lankans were bundled out for a paltry 103 in 18.1 overs. Barring opener Kusal Perera and Bhanuka Rajapaksha, none of the other batters could make an impact. The run-chase turned out to be one sided as Quinton de Kock’s fifty took South Africa over the finish line.

The pitch in Colombo hasn’t been an overly great one for batting. The spinners have gotten a fair amount of assistance from the surface. Run-making may not be an easy task in the final T20I. Batting second should be the way forward for both teams.

Playing combination for SL vs SA

Quinton de Kock has plenty of experience and he has arguably been the standout batter of the series. In two matches, the left-handed batter has notched 94 runs at an average of 94 and a strike rate of 117.50. In the previous game, the southpaw scored an unbeaten 58 and the knock should keep him in good stead. He will look to play another knock of substance.

Bjorn Fortuin has been a tough not to crack for Sri Lanka in the ongoing T20I series. The left-arm spinner has only picked up three wickets, but it’s his economy rate that has caught the limelight. The tweaker has given runs at 4.50, the best among any bowler in the series. Fortuin is also the only South African bowler to have bowled his quota of eight overs in the series. 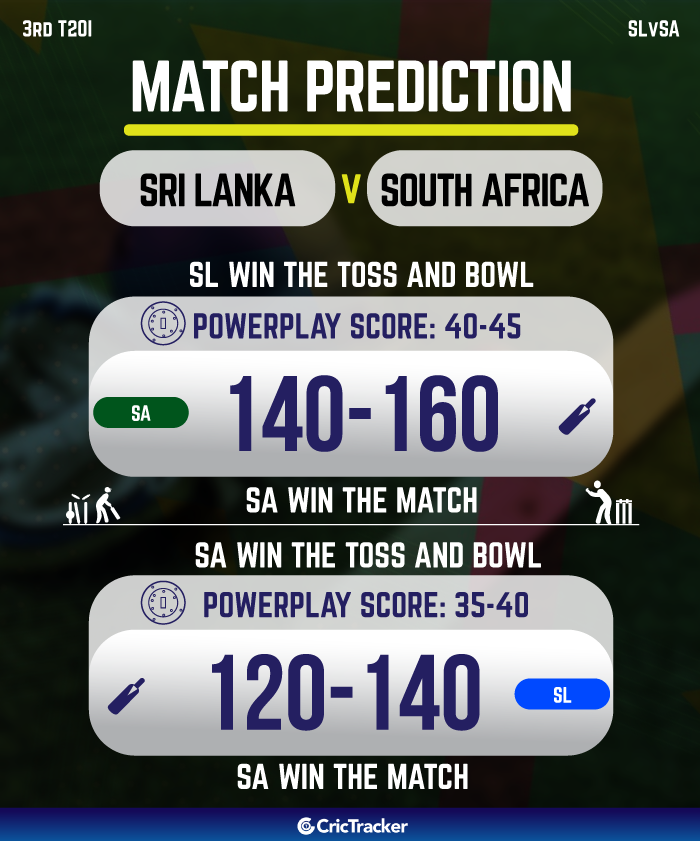