Stats: Cheteshwar Pujara and his love with run outs in Test cricket

Stats: Cheteshwar Pujara and his love with run outs in Test cricket

Five Indians including Pujara have got out run out on seven occasions in Test cricket thus far.

After a lot of talk surrounding the Indian team’s decision to drop Cheteshwar Pujara in the first Test, they brought him back at the cost of Shikhar Dhawan at Lord’s. India were invited to bat first by the hosts after a washed out first day. Pujara walked out to bat after Murali Vijay’s dismissal in the first over. The short span of play was repeatedly troubled by the play before the No.3 batsman got run out eventually. Pujara scored one run from the 25 balls he faced before he was stranded in the middle of the pitch attempting a risking single.

A mix-up between him and the Indian skipper Virat Kohli showed him the door just before another rain interruption. This wasn’t the first time Pujara almost threw his wicket away attempting for a quick single. In fact, this was the 3rd time in the last six Test innings he has been dismissed run out. Thus, he became the 4th Indian to be dismissed as many as three times in Test cricket in a calendar year. Rahul Dravid, another Indian No.3 batsman was run out as many as three times in 2002.

Most run out dismissals for an Indian in a calendar year in Test cricket: 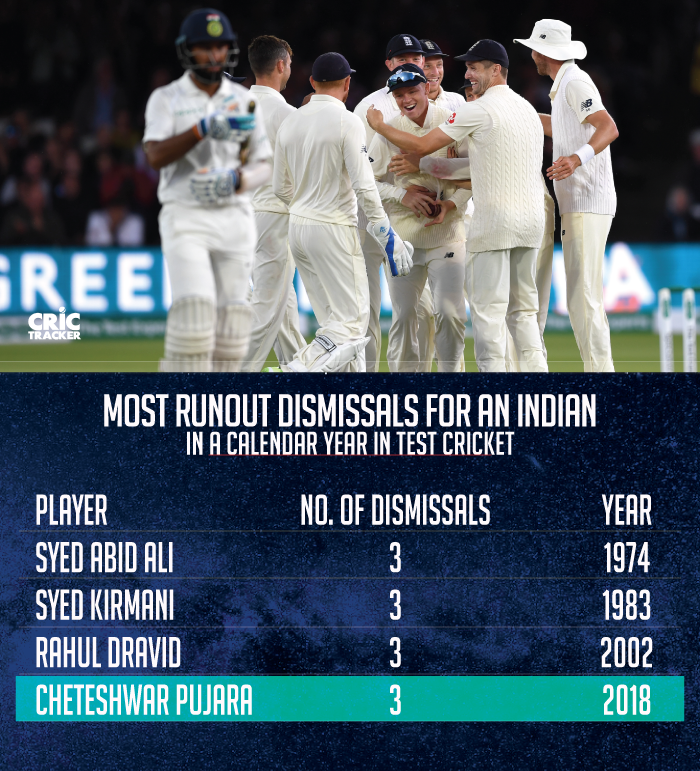 Pujara was the batsman in five occasions out of the last ten run out dismissals of Indians in Test cricket. Interestingly, he was the batsman on the other end twice in the remaining five occasions. The Saurashtra batsman has been dismissed run out on as many as seven instances in his Test career thus far. Since his debut in October 2010, no other player got out more than five times via a run out. The likes of Rangana Herath and Ross Taylor were dismissed run out five times apiece in this span.

Most times runout in Test cricket since Pujara’s debut (Oct 2010):

Most run out dismissals for an Indian in Test cricket: 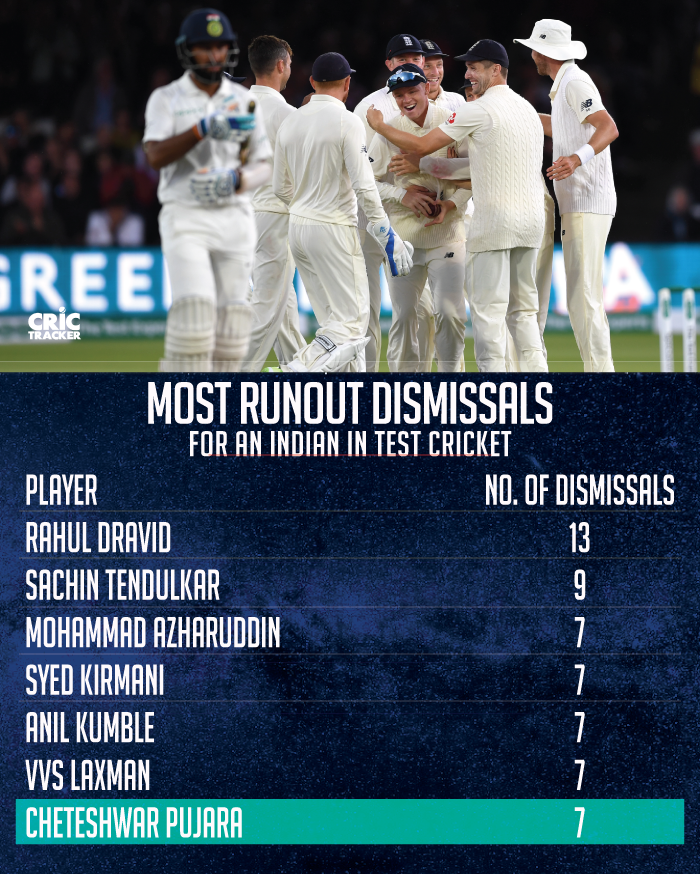