Stats: Fastest to 8000 runs in International cricket as captain

Stats: Fastest to 8000 runs in International cricket as captain

No points for guessing the cricketer who tops this list.

Team India skipper Virat Kohli has made it a habit to enter the record books every time he steps on the cricket field. Recently, when he took the field during the second ODI against Windies in Vizag, he broke numerous records with a thundering ton to his name. He scored his second ton in the series in as many number of matches, and it was his 37th ODI ton.

He is just 13 shy of touching the ‘once believed to be an improbable number to match’ number of 50 ODI tons. In the match, Virat Kohli slammed an unbeaten 157 off just 129 deliveries with 13 fours and 4 sixes. En route his knock, he scaled past the 10000 run mark in ODI cricket. He became the fastest to reach the milestone number, taking just 205 innings for the same.

Interestingly, another record beckoned his way during the knock. He touched the figure of 8000 runs in International cricket as captain. Again, he became the fastest to reach this number. Virat Kohli took just 113 matches, and 137 innings, to reach the coveted feat.

The greatness of the Indian captain can be measured from the fact that the next best in line achieved this feat in 166 matches (187 innings). Former Australian captain Ricky Ponting is second in the list.

Legendary Indian cricketer and former skipper MS Dhoni also features in the list of top 10. He managed to reach this achievement in 220 matches and 227 innings. Other big names who grace this illustrious list include the likes of Arjuna Ranatunga and Stephen Fleming.

The way Virat Kohli is currently playing, he is bound to break many more records not just as a captain but also as a cricket.

Fastest to 8000 runs in International cricket as captain: 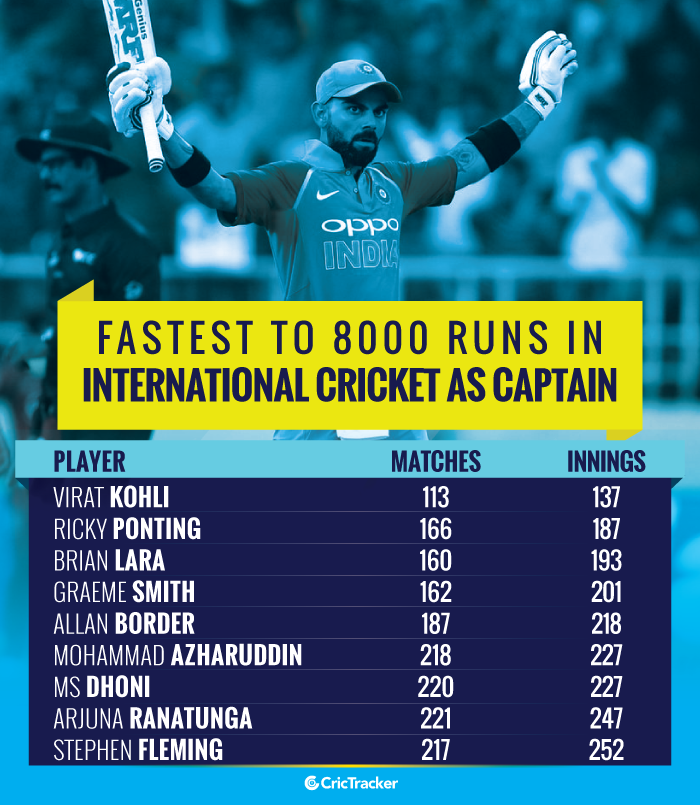 Get the latest Cricket News and updates from Match Predictions, Fantasy Cricket Tips and lots more on CricTracker.com.