He became only the fifth player to hit 27 centuries in the format of the game.

Veteran South African cricketer Hashim Amla entered the record books yet again. He hit the 27th ODI ton in the recent fixture against Pakistan, 1st ODI of the series in Port Elizabeth. He became the fastest cricketer, in terms of innings, to reach the milestone of 27 ODI centuries. Also, Amla became only the fifth player to hit 27 centuries in the 50-overs format of the game.

The Proteas opener hammered his 27th ton in his 167th innings, surpassing the previous record holder Virat Kohli‘s achievement in 169 innings. Amla has largely played in the shadows of bigger names like AB de Villiers over the years. But make no mistake, he is a stalwart of the game. The last couple of years have been quite tough for the South African, but with the ICC World Cup 2019 drawing close, he has struck form just at the right time.

Amla had a forgetful time in the home assignment against India earlier last year and desperately needed to make amends. His previous ODI ton had come back in 2017, when he had hit an unbeaten 110 off 112 deliveries against the touring Bangladeshi side at the De Beers Diamond Oval, Kimberly. He failed to notch up a ton in 2018.

In the recent match against Pakistan, Amla scored an unbeaten 108 off 120 deliveries. He brought up his ton with a six and the relief was evident enough on his face. His effort helped South Africa post 266/2 in their stipulated 20 overs. A fact that would surprise many is that between Amla’s last two hundreds Kohli has scored 9 while Rohit Sharma has added 8 ODI tons to their name.

Commenting on the players who have hit 27 ODI centuries or more, there are only five cricketers. Sri Lankan legend Sanath Jayasuriya took 404 innings to get to the milestone, while former Australian skipper Ricky Ponting had to play 308 innings to bring up his 27th ODI ton. Legendary cricketer Sachin Tendulkar brought up his 27th ton in the format in his 254th outing.

All these gentlemen were surpassed by Virat Kohli in January 2017. The Indian skipper who currently has 39 ODI tons to his name, hit a match-winning 122 against England in Pune back then to register his name in the record books as the fastest cricketer to 27 ODI tons. The record is now held by Hashim Amla.

Here is the list of cricketers fastest to 27 ODI tons: 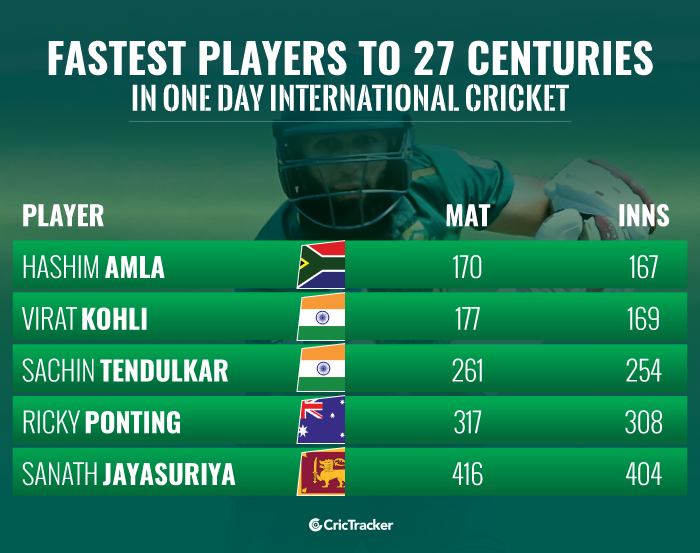