Ishant is the 7th Indian player and the 3rd Indian pacer to complete 250 wickets in Test cricket.

Ishant Sharma has slowly crawled towards the big lists in Test cricket despite a below-par bowling average and strike rate compared to fellow competitors. Ishant’s career struggled with consistency in his bowling and having played most games at home and in the sub-continent where there is little help to the pace bowlers. Playing alongside Ravichandran Ashwin also had an effect to his numbers as the off-spinner claims bulk of the wickets and in fact bowls with the new ball most times ahead of the pacers.

Ishant was regarded as the spearhead of the Indian Test team during the 2013-2015 overseas cycle where he returned with good numbers after the tour four countries. However, it was the same old story for him when he returned to bowling in Asia costing him a place in the XI due to the competition among pacers. An improvement in working with the seam and adjusting his wrist position helped Ishant to force his way back into the Indian team.

In the past one year, he averages in low 20s and takes about seven overs for every wicket. In this process, Ishant completed 250 wickets in Test format during the ongoing Test match in Southampton. The experienced paceman trapped the England skipper Joe Root in front to complete the milestone. However, he needed as many as 86 Test matches to get to 250 Test wickets which is the 2nd most among the 43 players who have 250 Test wickets.

Ishant is also the 7th Indian player and the 3rd Indian pacer after Kapil Dev and Zaheer Khan to complete 250 wickets in Test cricket. Jacques Kallis took 127 matches to get 250 wickets but he played throughout his career as a specialist all-rounder. Taking Daniel Vettori and Chaminda Vaas’ batting numbers in consideration in the longer format, it will be tough to consider them as specialist bowlers. The two left-armers needed 81 and 77 matches respectively. South Africa’s Morne Morkel needed 74 Tests for 250 wickets in the format.

Most number of matches for 250 wickets in Test cricket: 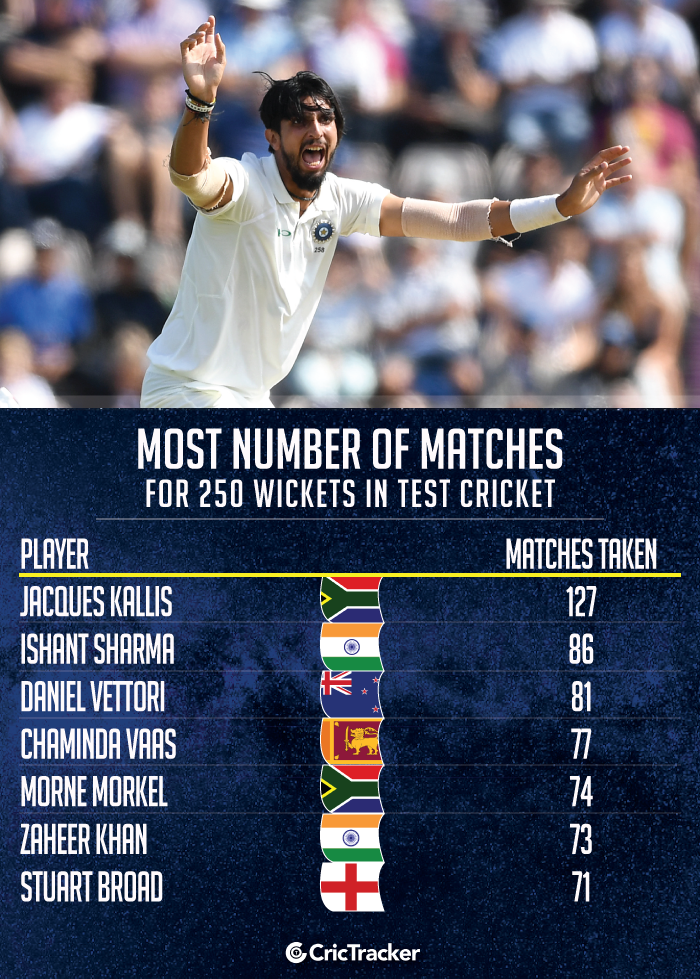