Here are all the stats and numbers recorded from the record innings by the Uttarakhand batsman.

Indians have scored the majority of double centuries in the ODI format but fall behind when it comes to domestic while there are quite a few recorded by other nations. As many as three players have scored five ODI double centuries for India but none in Domestic cricket until the end of 2017/18 season. The 200-run barrier was finally breached in the Vijay Hazare Trophy in 2018/19 season as the Uttarakhand batsman Karanveer Kaushal scored 202 on Saturday.

Here are all the stats and numbers recorded from the record innings by the Uttarakhand batsman:

Kamran Akmal and Abid Ali scored in the Pakistan domestic One-Day tournament at the start of 2018 while another Pakistan player Fakhar Zaman scored in an ODI against Zimbabwe. D’Arcy Short registered the 3rd highest score ever in this format with 257 about seven days ago.

5 – Karanveer Kaushal became the 5th Indian to score a double century in List A cricket. Sachin Tendulkar scored an unbeaten 200 to breach the barrier in the ODI format while Virender Sehwag went past him with 219 in the very next year.

Rohit Sharma scored as many as three including a record 264 while Shikhar Dhawan hit 248 for India A against South Africa in 2013. Dhawan’s effort is the only List A double ton by an Indian outside India.

Double centuries by Indian players in List A cricket: 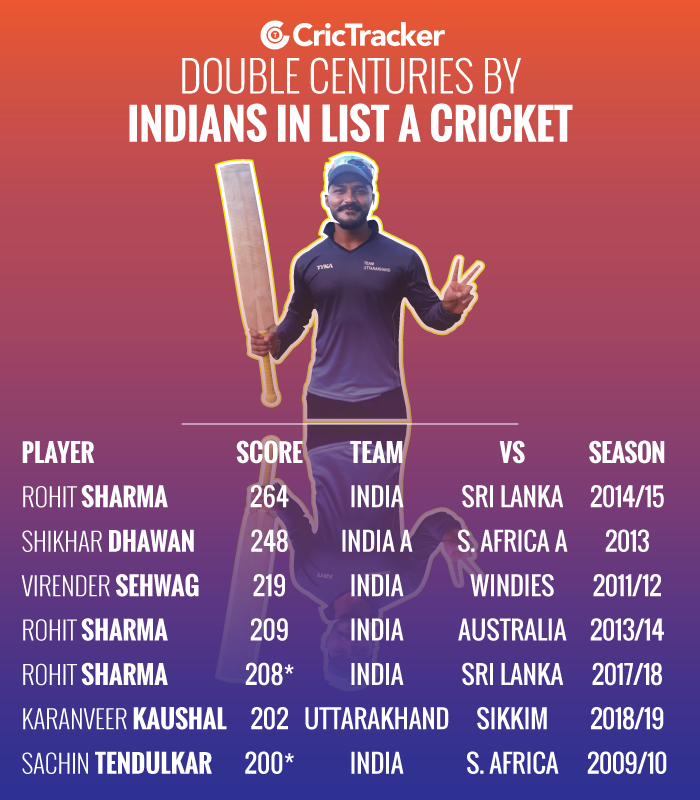 202 – Karanveer’s 202-run knock is the highest individual innings in Indian domestic List A surpassing Ajinkya Rahane’s 187 for Mumbai against Maharashtra in the 2007/08 season.

296 – The 296-run opening partnership of Kaushal with Vineet Saxena is the highest in Indian Domestic List A for any wicket. The previous highest was 277* by Aakash Chopra and Shikhar Dhawan pair in the 2007/08 season for Delhi against Punjab.

296 – The partnership of 296 runs between Kaushal and Vineet is also the 2nd highest by an Indian pair in List A cricket. Sachin Tendulkar and Rahul Dravid shared a 331-run stand for the 2nd wicket in the 1999 ODI against New Zealand in Hyderabad.