KXIP vs RR | The duo fell only three runs short from ending at the top of the tree.

KL Rahul and Mayank Agarwal put on an absolute show in Kings XI Punjab’s (KXIP) match against the Rajasthan Royals (RR) at the Sharjah Cricket Stadium. On Sunday, September 26, the opening duo almost broke the highest-ever partnership for the opening wicket in the history of the Indian Premier League (IPL). The openers turned out to be unstoppable forces, keeping RR at bay.

They managed to put on a stunning 183 runs off a mere 99 balls. After Steve Smith’s Royals put KXIP to bat first, Rahul and Agarwal threw the kitchen sink at everything and took advantage of the short boundaries in Sharjah. The pitch at the venue was an absolute belter during RR’s match against the Chennai Super Kings (CSK) and it wasn’t any different whatsoever this time around.

In the powerplay, they put on 60 runs to set the tone for the rest of the innings. In the stand, it was Rahul, who played the sheet-anchor’s role, scoring 69 runs off 54 balls with the help of seven fours and one over-boundary. The KXIP captain managed to carry on from where he left against the Royal Challengers Bangalore (RCB). Agarwal, on the other hand, put his best foot forward.

Also Read- Top 5 teams with most centuries in IPL history

He got to his half-century off 26 balls after which he got to his maiden IPL century off 45 balls. Agarwal, eventually, went on to notch 106 runs off 50 balls with 10 fours and seven sixes. It was Tom Curran, who gave the Royals something to cheer for. The England pacer got rid of Agarwal, who, unsuccessfully, failed to clear the mid-wicket boundary, holding out to Sanju Samson.

In the very next over, Ankit Rajpoot sent Rahul back. In the meantime, Rahul and Agarwal put together the third-highest partnership in the history of the IPL. The record is held by Sunrisers Hyderabad’s (SRH) Jonny Bairstow and David Warner in the match against RCB in Hyderabad.

Second in the list is Gautam Gambhir and Chris Lynn, playing for the Kolkata Knight Riders (KKR) against the defunct Gujarat Lions in 2017. As far as Rahul and Agarwal are concerned, their opening blitz lifted the Punjab-based franchise to a colossal score of 223 for two in 20 overs. 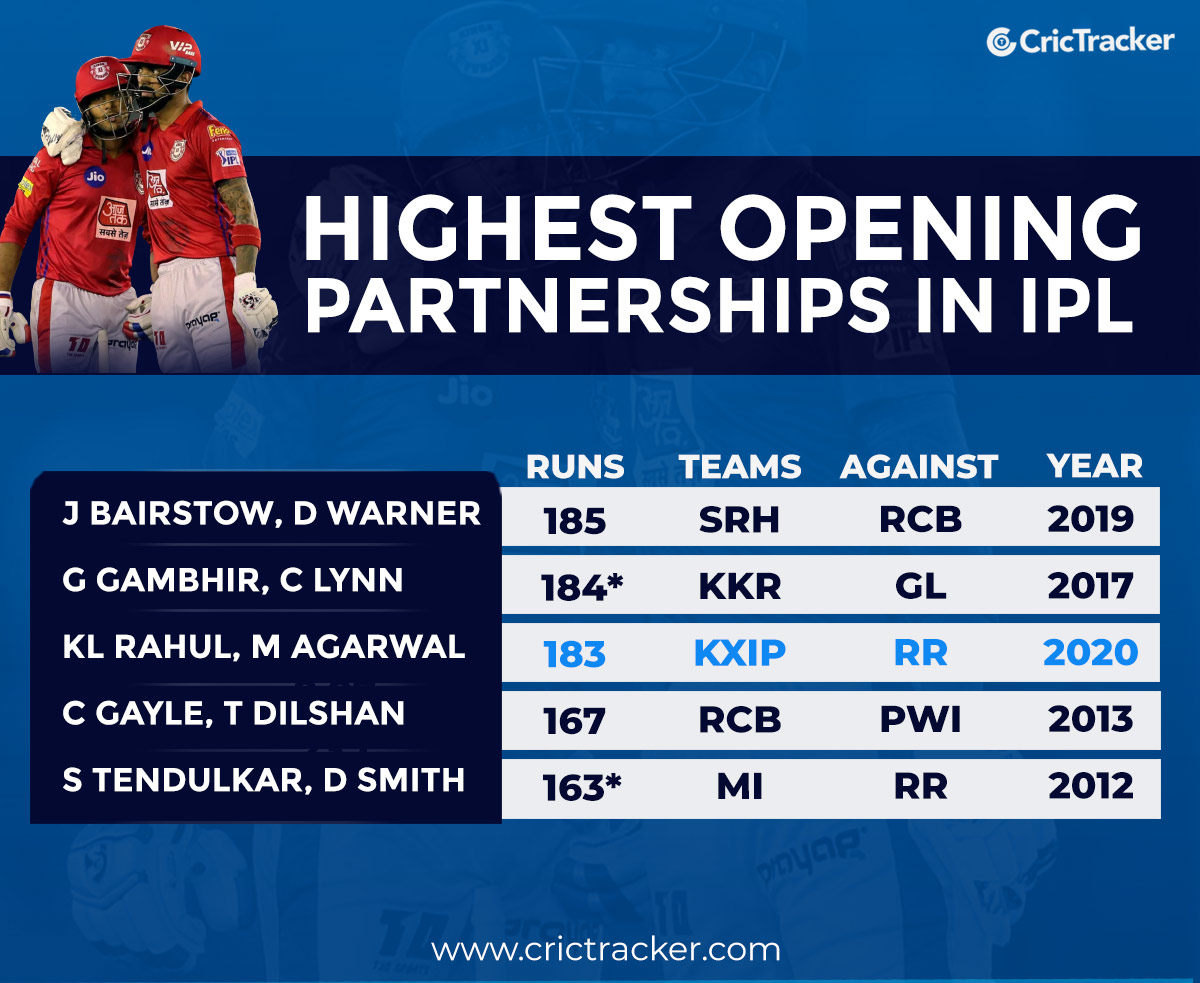