Stats: Mohammad Nabi misses an ODI played by Afghanistan for the first time

Stats: Mohammad Nabi misses an ODI played by Afghanistan for the first time

Mohammad Nabi and Rashid Khan missed the ODI series in Scotland due to IPL commitments.

Mohammad Nabi’s ODI career is as old as Afghanistan as the all-rounder made his debut in this format in country’s maiden ODI game. The all-rounder has played a key role in Afghanistan to becoming a Test nation way back from 2003 from being an 18-year-old. Sunrisers Hyderabad’s qualification to the playoffs ensured the Afghanistan star players Mohammad Nabi and Rashid Khan stayed back in India for the knockout phase.

This meant Afghanistan will miss the services of two big names for the 2-match ODI series against Scotland. The duo has gained the experience by playing T20 leagues across the globe and displayed what the Afghans can do in the sport. Missing the series in Scotland brought an end to Mohammad Nabi’s streak of featuring all ODI matches played by Afghanistan. The Afghans played as many as 111 ODIs prior to this ODI series with Nabi featuring in the playing XI in all those matches. 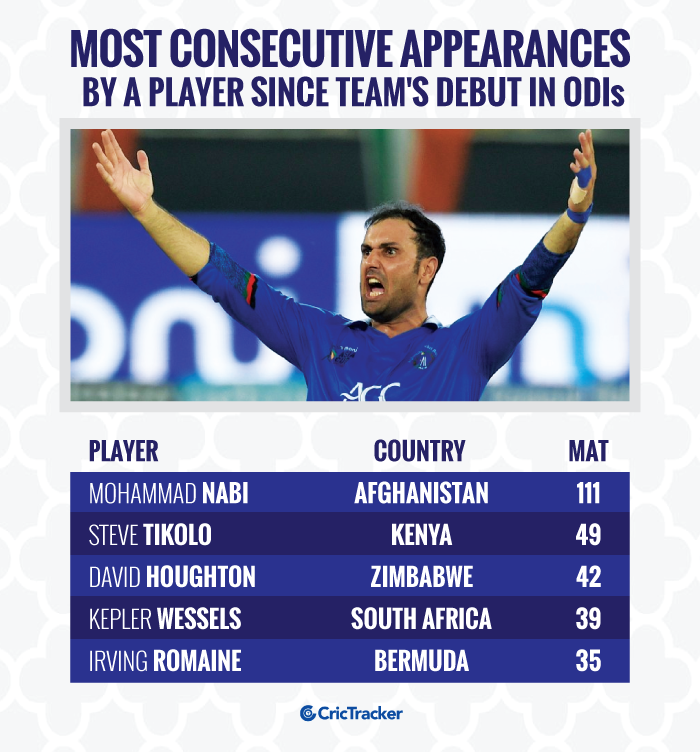 Mohammad Nabi featured in each of the first 111 matches played by his country, no other player featured in even a country’s first 50 ODIs. The previous best such record is held by Steve Tikolo of Kenya as he played his country’s first 49 ODI games. Mohammad Nabi is also one of the two players to play in 100 or more consecutive matches for a team since their ODI debut.

Andy Flower was the first to do so having played 172 consecutive ODI matches played by Zimbabwe since the 1992 CWC. Flower made his ODI debut in the Mega event and scored a hundred in his first game itself. In this modern era, it is always tough to be part of as many games in a succession. In fact, in the last ten years, Nabi is one of the two players to feature in 100 successive matches played by a team. Virat Kohli played 102 consecutive ODIs played by India between 2010 and 2014.

Most consecutive appearances for a Team since ODI debut 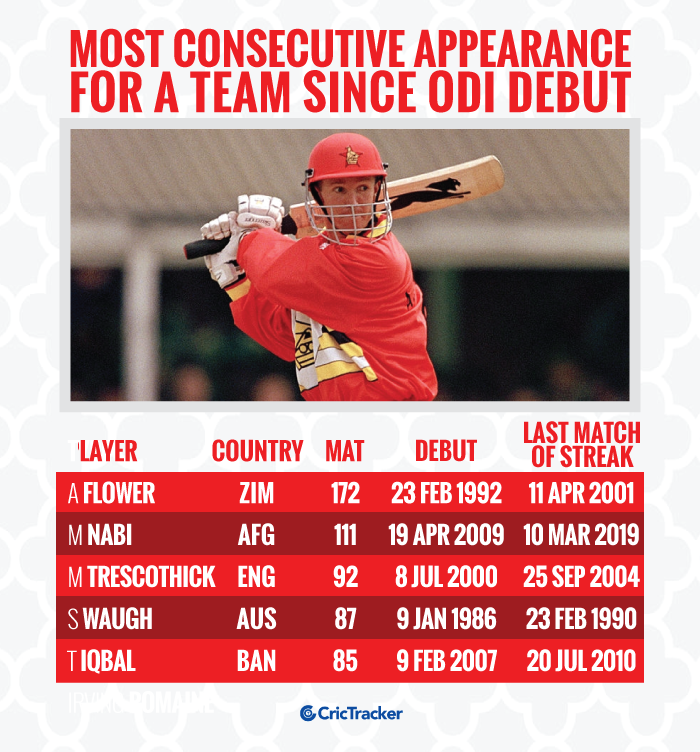