Stats: Most consecutive centuries in a country in ODI format

Stats: Most consecutive centuries in a country in ODI format

Among the several record lists Kohli made an entry in is this but he still has more to do to earn a position at the top.

Team India skipper Virat Kohli extended his Bradmanesque run in international cricket in another fixture. He notched up his third consecutive ODI ton in the ongoing assignment against the Windies. Playing in the 5-match series, the Indian captain has managed to score three tons in as many games. The kind of form he is in at the moment, it will not be a surprise to see the Delhi boy breach a few more records.

The most recent ton came in the third ODI at Pune. Chasing 283 in the match, the Indian side needed someone to play the anchoring knock on a slightly sluggish track. While most batsmen disappointed on the day, Virat showed sheer brilliance to score his third ton of the series. This was his 38th ODI hundred and he is now just 12 short of the milestone number of 50 tons in this format of the game.

Every inning that Kohli plays, he manages to breach a few records. With his ton in Pune, he entered another record list as well – the list of cricketers with most consecutive centuries in a country in ODIs. Virat Kohli now has 4 consecutive tons on the Indian soil. Kohli’s previous appearance in an ODI fixture before the ongoing series was in the Kanpur ODI against New Zealand in the 2017-18 season.

In that fixture, Kohli had slammed 113 runs in a winning cause. He followed it up with three centuries against the Windies. Kohli has every chance to top this list if he manages to score another couple of centuries. Currently, Pakistan batsman Babar Azam holds the record for most consecutive centuries in a county. In the 2016-17 season, Azam notched up 5 consecutive tons in the UAE.

Another batsman who has 4 consecutive tons in a country is AB de Villiers. Surprisingly, de Villiers had achieved this feat on Indian soil. He had scored 4 tons in the 2010-11 season. In another record set, Kohli will also eye the record of scoring most consecutive ODI tons. Currently, only one cricketer has scored 4 consecutive ODI centuries – Kumar Sangakkara.

Most consecutive centuries in a country in ODI format: 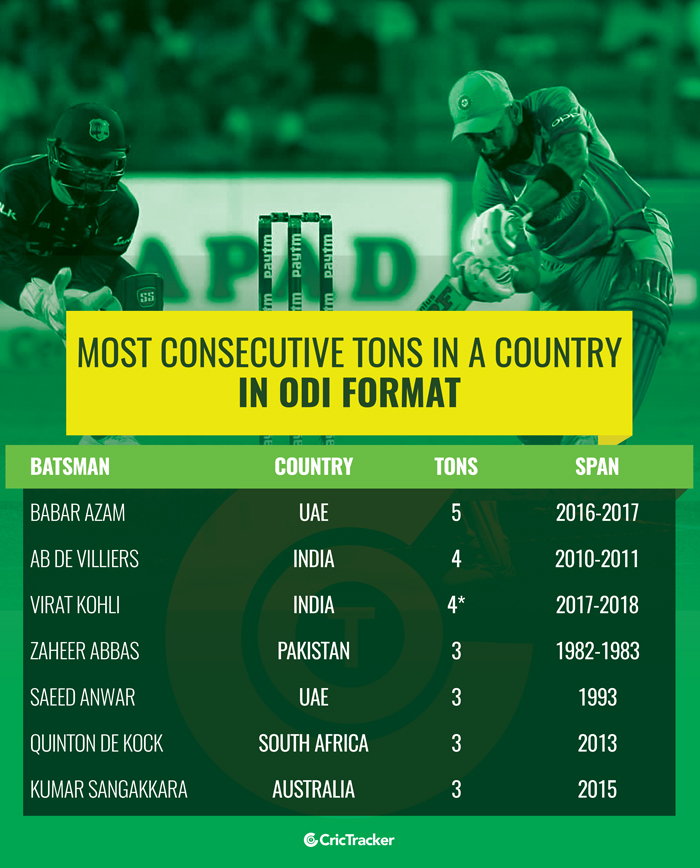