Stats: Most runs by a batsman in ODI cricket between two dismissals

Stats: Most runs by a batsman in ODI cricket between two dismissals

Fakhar Zaman was dismissed only twice during the 5-match ODI series against Zimbabwe.

Fakhar Zaman batted like a dream throughout the Zimbabwe tour scoring 278 runs in the T20 Tri-series and followed it with 515-run ODI series against the hosts. The Pakistan opener shattered many batting records including some decade-old ones during this series. He also became the first Pakistan player to score a double century in ODI cricket when he made an unbeaten 210 in the 4th match and surpassed Saeed Anwar’s 194 recorded way back in 1997.

Fakhar Zaman completed 1000 runs in ODI cricket taking only 18 innings and became the fastest to the milestone. Sir Vivan Richards became the first player to complete 1000 ODI runs in 1980 taking 21 innings which stood as a record till the left-hander’s big series against Zimbabwe. Four other players took 21 innings for 1000 ODI runs but none of them bettered Richards’s feat. Fakhar also became the 2nd player to score 500 runs in a single bilateral ODI series after Virat Kohli.

The speciality of Fakhar Zaman in this 5-match ODI series is that he got out only twice. He got out to the debutant Liam Roche by giving a return catch to the off-spinner in the first ODI. Interestingly, Fakhar became Roche’s 2nd ODI wicket as well when he was caught behind for 85 in the final ODI. Between these two dismissals, Fakhar managed to score a record 455 runs thanks to his unbeaten 117, 43 and 210 in the 2nd, 3rd and 4th ODIs respectively.

Most runs between two dismissals by a batsman in ODI cricket: 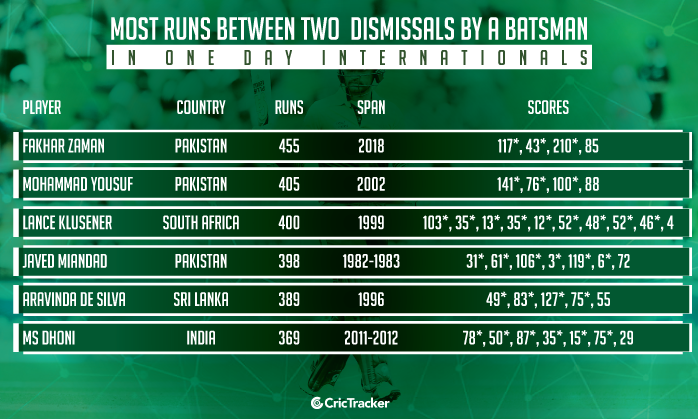