Stats: Most sixes by a player in ODI cricket history

Rohit Sharma lit up the Brabourne Stadium with a blazing knock of 162 runs in the fourth ODI against the Windies in Mumbai. The fact that his 21st century came at his home ground made the achievement even more special. His wife Ritika Sajdeh was also sitting in the stands and must’ve definitely felt proud. Rohit smacked 20 fours and four maximums during his 137-ball knock and in the process, went past Sachin Tendulkar in terms of most sixes hit in international cricket.

The 31-year-old now has 198 maximums to his name in 186 innings and the master blaster had smashed the ball out of the park 195 times in 452 outings. Clearly, Rohit will scale even more heights in this aspect of his game and with age on his side, he can even trump Shahid Afridi who is topping the list at the moment with 351 sixes in One-Day International cricket.

Rohit Sharma is currently at the seventh position in terms of the most sixes hit in the history of the 50-overs format. Brendon McCullum is only 2 maximums ahead of him and if the Indian vice-captain continues the same form, he might well go past AB de Villiers, who ended his career with 204 sixes to his name, in the fifth an final ODI against the Windies.

MS Dhoni, the master of finishes in the shorter format, couldn’t add to 218 sixes today despite scoring a bright 23-run knock off 15 balls while batting in the death overs. He is currently fifth on the charts and might add a few more until he hangs his boots post the World Cup next year in England.

Chris Gayle (275 sixes in 279 innings) and Sanath Jayasuriya (270 sixes in 433 innings) are second and third respectively to hit the most number of maximums in their illustrious ODI career. Sitting pretty at the top is none other than Afridi with 351 sixes in 369 outings for his country.

Most sixes by a player in ODI cricket 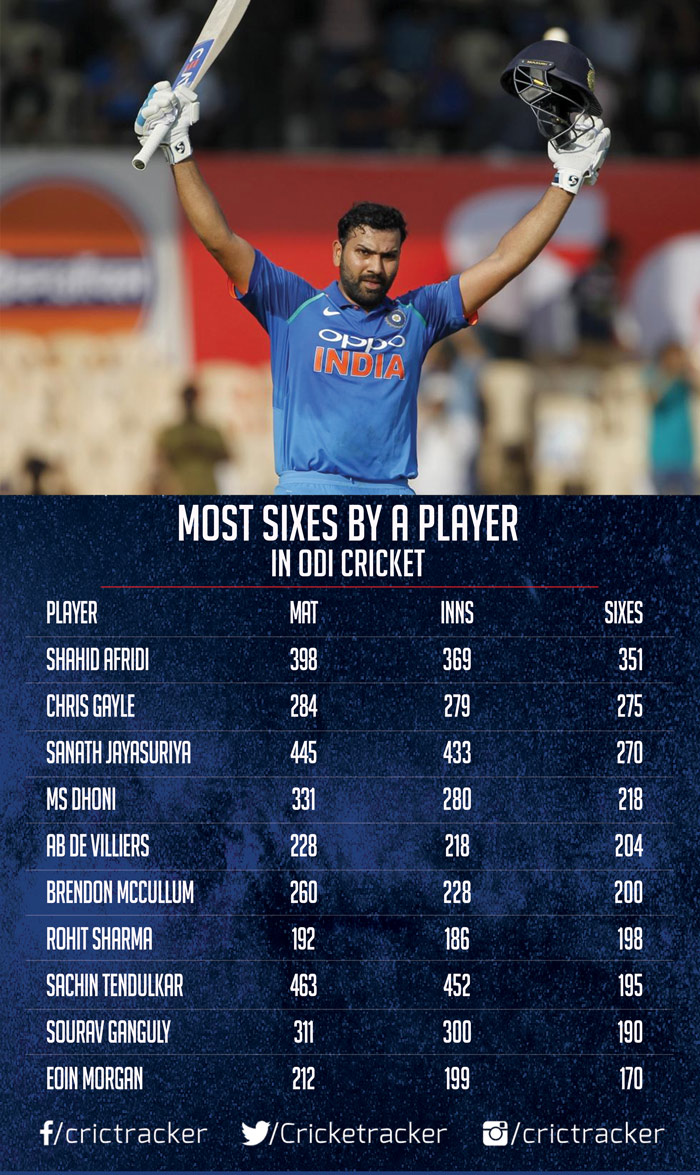