Parvez Rasool took 8/85 against Services and followed it with a second innings century.

In a crucial game of the 2018-19 Ranji Trophy Jammu and Kashmir captain Parvez Rasool bailed his team out of trouble with his all-round performances. Rasool began the season with an unbeaten 4th innings century against Rajasthan but his team lost by 75 runs while chasing a record 395-run target. In the 3rd game against Tripura, he claimed a five-fer which helped J&K register an outright win. In the ongoing match against Services, Jammu and Kashmir bundled out for just 95 runs after electing to bat first.

The hosts gained lead without losing a wicket thanks to a 114-run opening stand. Rasool stepped up with the ball with his career-best bowling of 8/85 to bowl Services out for just 252. In the second essay, J&K were six down for 92 and were still trailing services by 65 runs. Their skipper Rasool then put on an 82-run stand for the 7th wicket with Aamir Aziz and 64 for the 8th wicket with Waseem Raza. Parvez ended up scoring 115 as his team made 261 to set a target of 105 for Services.

Thus, Parvez Rasool became only the 4th Indian in first-class history to score a century and claim an 8-wicket haul in the same game. Rasool is also the second player from Jammu and Kashmir to achieve this feat after Ravinder Pandit who did it way back in 1986-87 also against Services. Jalaj Saxena is the only one to achieve this feat twice which he did while playing for Kerala once each in 2017-18 and 2018-19.

By end of 3rd day, Services were five down for 67 runs on the board and needed 38 more runs to win. The J&K captain has recorded figures of 11-5-11-2 in the second innings thus far and completed ten wickets in the game. He thus became only the 15th player in Ranji Trophy to score a century and take ten wickets in the same game. Only four of them including Rasool achieved this double while leading the team and the first in last 23 years.

A century and an 8-wicket haul in a first-class match by Indians: 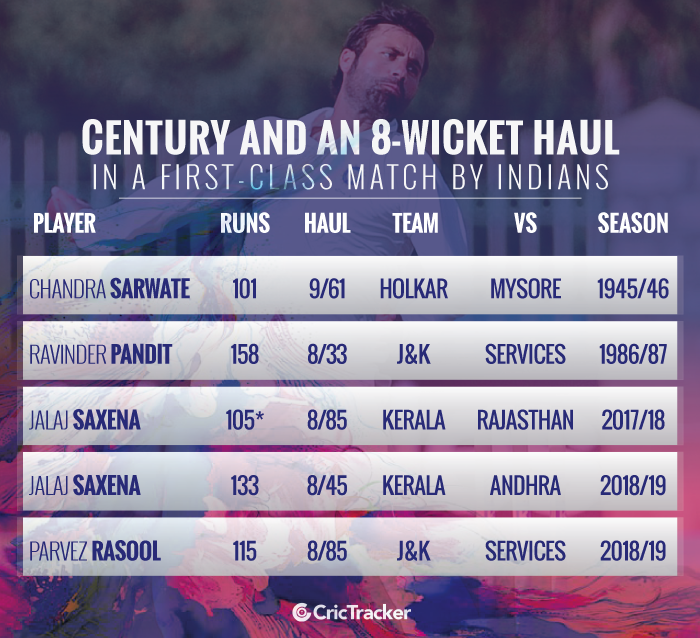